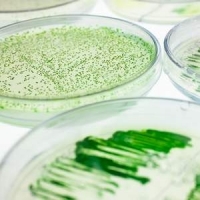 Oregon, United States [RenewableEnergyWorld.com] Earlier this summer, Exxon Mobil announced that it plans to produce algae-based biofuels in partnership with Synthetic Genomics, a biotechnology company founded by human genome pioneer Dr. J. Craig Venter. Yet even with its US $600 million investment, Exxon representatives have said that large-scale production of algal biofuels is still “5-10 years away.” Indeed, there are many pros and cons to using algae as a biofuel feedstock, as well as hurdles to its commercialization.

Algae have indisputable advantages as a biofuel feedstock. Of all the green fuel options, “only algae appear to have the potential to provide the huge quantities of renewable oil required for substantially displacing petroleum-based transport fuels,” said Dr. Yusuf Chisti, Professor of Biochemical Engineering at Massey University in New Zealand, whose laboratory researches the cultivation and processing of algae for biofuel production.

Microscopic algae yield up to 100 times more oil per acre than soybeans and other common biodiesel feedstocks, according to Mary Rosenthal, Executive Director of the Algal Biomass Organization. Microalgae can be up to 80% oil by dry weight, although that number is for wild strains that are slow growers, according to Dr. Margaret McCormick of the technology company Targeted Growth. Genetically engineered microalgae, such as those created by Targeted Growth, approach 35%-45% oil by dry weight, but achieve dense cultures in one day. Through genetic manipulation, scientists can also control the oil composition, and generate strains specialized for particular growth conditions, such as high salinity or temperature extremes.

When grown photosynthetically, microalgae are a two-for-one environmental benefit — CO2 mitigation plus a renewable energy source. Microalgae can capture sunlight 20-40 times more efficiently than plants, and unlike corn- or soy-based feedstocks, they do not create a “food or fuel” dilemma. Some can be cultured using seawater. Finally, much of the groundwork for algal biofuels was done by the United States Department of Energy Aquatic Species Program, which developed strains, techniques and pilot programs from 1978-1996.

From Cells to Oil: Many Paths

The versatility of microalgae means it’s hard to predict the most promising avenue for harvest, processing and finally commercialization.  While more than 40,000 wild algal species exist, algal biofuel leaders like Solazyme and Sapphire Energy use genetically selected or engineered strains for oil production, according to company representatives.

In addition to growing photosynthetically, with sunlight as an energy source and CO2 as a carbon source, microalgae can be grown heterotrophically, using sugar, glycerol or cellulosic biomass for energy and carbon. Solazyme uses the latter technique, which gives up the solar advantage in exchange for faster growth, a higher culture density for easier harvesting and a process that fits the existing industrial fermentation infrastructure. Solazyme’s heterotrophic cultivation requires growth in a closed tank system, or bioreactor. Other companies like Sapphire Energy and Solix Biofuels grow microalgae photosynthetically, Solix in photobioreactors and Sapphire Energy in ponds on non-arable land.

Once the microalgae are cultivated, biofuel manufacturers are faced with two major technical hurdles: harvesting and dewatering. Microalgae cultures can be 80%-90% water, so cells must be collected by settling, which is time-consuming, although this can be hastened with flocculating agents that cause cells to clump and precipitate. More high-tech methods like centrifugation and filtering are faster, but are more costly in both dollars and energy.

Once harvested, cells may be air- or sun-dried, requiring a large surface area and significant time, or they can be dried using heat or a vacuum, again increasing the cost and reducing energy efficiency.

Finally, extracting the oils is another challenge. Options include extraction with solvents like hexane, enzymatic digestion of cell walls, or physical disruption with ultrasonic sound waves or microwaves.

The Exxon-Synthetic Genomics partnership genetically engineers strains to continuously secrete oil. Professor Chisti explains that in the future, microalgae might be engineered to “rupture at a certain age and release their oil content.” In either method, the complexities of collecting, drying and breaking open the algal cells would be bypassed since the oil could be harvested by simply skimming the culture.

Oil obtained from microalgae can be used as a straight vegetable oil fuel, but this requires a modified engine. Dr. Eric Jarvis, a scientist at the National Renewable Energy Laboratory (NREL), said that while the home hobbyist might enjoy modifying engines to use algae biofuel, “no one wants to do it at the commercial level.”

Biodiesel can be used in existing diesel engines and is produced by straightforward and established transesterification technology. This chemical reaction starts with simple triglyceride lipids, which are fats and oils from plants, waste foods or algae. The triacylglycerols are chemically reacted with alcohol, with the help of enzymatic or chemical catalysts. The resulting biodiesel has the characteristics of petroleum diesel and can be used alone or in a blend.

The big pay-off in algae biofuels will be as drop-in replacements for gasoline or jet fuel. Successful test flights have already been run on mixtures of petroleum and algal-based jet fuels. Chisti says, “generally, only a portion of the crude algal oil is suitable for making biodiesel, but all of it can be used to make gasoline and jet fuel.” For this, the fatty acids in the algal oils are refined by hydrogenation and hydrocracking.

NREL’s Jarvis believes the refinery pathway has the most flexibility, in part because the techniques are already established for petroleum. He says that “oil chemists know how to do the cracking and hydrogenation, so they can change the fatty acids into what they need.” Also, refining is necessary “to get the energy-dense targets like jet fuels. You can’t use ethanol on airplanes.” In addition, less refined products have problems with gelling, which Jarvis cautions, “you don’t want happening at 30,000 feet.”

Even with the proven potential of algal biofuels, cost-effectiveness is an issue. Biofuels currently compete with petrochemical fuels, which have economy of scale. A 2007 analysis of the economics of algal biofuels by Chisti suggested that a five-fold reduction in production costs was needed to compete with plant- or petroleum-based diesel. Now, Chisti says, “issues relating to climate change may leave us with no choice but to replace petroleum fuels with renewable, carbon-neutral algal fuels, despite a somewhat higher cost.”

Algal biofuel manufacturers have another ace up their sleeves: coproducts. Algae excel at making complex organic compounds like B and C vitamins and beta-carotene that are used as fragrances, flavorings, pigments and supplements. These can sell for hundreds of dollars a kilogram, so harvesting both the coproducts and feedstock oils can potentially offer manufacturers another revenue stream and make cultivating and processing microalgae more economical.

Even after lipid and coproduct extraction, the remaining proteins and carbohydrates in the biomass can be used as animal feed, or fermented by anaerobic bacteria to generate methane. The coproduct strategy lets algae manufacturers achieve economic feasibility. Plus, the Exxon-Synthetic Genomics partnership gives algal biofuels a big publicity boost. Dr. McCormick of Targeted Growth says it’s “great for the industry…this shows that companies are looking to see how they can make algae work for them, and we welcome that investment.”

Chris Tachibana, Ph.D, is a science writer based in Seattle and Copenhagen, Denmark. Visit her website here.