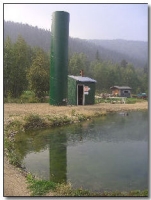 Fairbanks, Alaska [RenewableEnergyAccess.com] Acres of wilderness and cramped with wildlife are descriptions of Alaska that make the state sound like a haven for environmentally friendly practices. However, when Bernie Karl and his wife Connie Parks-Karl decided to purchase the Chena Hot Springs Resort six years ago they found a spa full of diesel generators and wood stoves. Bernie said he wasn’t surprised.

The energy approach was indicative of the renewable energy efforts Bernie said he sees in the state and across the nation. People simply aren’t using the available resources. “If we would put the same effort into alternative energy as we would putting a man on the moon, we would already be (using alternative energy),” he said. A resort physically based on one of the more natural heat resources around that chooses to heat with fossil fuels is a classic case of not seeing the forest for the trees. The hot springs are a result of geothermal heat that is allowed to rise to the earth’s surface through fissures in the planet’s core. Heat from the springs can offer more than a toasty mineral bath, it can help provide electricity. The resort was recently awarded two grants from state and federal sources totaling $2 million to develop a generator and turbine electricity system. Bernie is working with United Technologies of Hartford, Connecticut on the development of a demonstration 400 kW low-temperature power generator that should be able to generate electricity from the 165 degrees F water at the springs. The prototype should be ready by July of 2005. If the demonstration is a success, Bernie said the company should begin manufacturing production models at the end of 2005. Being on the cutting edge of an energy technology is an exciting prospect for him. “When this prototype starts making electricity ? it will totally change small energy consumption and production,” he said. Geothermal isn’t the only energy source Bernie has experimented with at the resort. A renewable energy learning center features, and is powered by, a 480 W solar photovoltaic (PV) array and 200 W AeroGen wind turbine. In Alaska it is always necessary to have as many back up sources of power as possible, however, and a gas generator is always standing by just in case. Alaska has never had a power grid that connects the whole state. There are often 60 or more miles between neighboring towns, and each town to supplies its own source of power. Diesel and propane generators are portable and convenient. And the generators will often work through the dark winter months when places, such as Chena Hot Springs, live through six weeks when there is only about an hour of dusky sunlight during the day. Power from a geothermal generator could cut down on the time when a diesel generator is necessary. Bernie is convinced that the generator will work for the village situation, now he just has to bring people from the state on board with the idea. One of the grants for the project came from the Alaska Industrial Development and Export Authority, so the state is interested in the work. The resort also hosted a geothermal energy conference a few months ago. Projects Manager Gwen Holdman said part of the reason the resort has such a mix of renewable energy technologies is so other people can come in to learn about the available power options. Though they plan to demonstrate low-temperature power generation, Holdman said Chena Hot Springs is not the best geothermal resource Alaska has. Pilgrim hot springs, and the Makushin and Akutan volcanoes have much greater potential, and encouraging state officials to look for power there should help move things right along. “That is going to get us so much further ahead than if there were just one or two people working on this,” she said. Energy is Holdman’s area of expertise, she designed micro-hydro projects before working at the resort, and she said that promoting the use of all renewable energy sources in Alaska is the big picture project. There are state sponsored loan programs and solar land easements that support PV and solar thermal installations for businesses and private homes. But a summary of the state’s statutes and administrative codes doesn’t show much more than that. Bernie said he isn’t afraid of promoting available energy sources to the state so Alaska will start looking at renewable options. But he knows it’s going to be a challenge. “There’s been several snake oil salesmen in the history of alternative energy,” he said. If he can show that the geothermal steam from the Chena Hot Springs is a viable and cost efficient option, he said, then at least he’s working to make the state better.