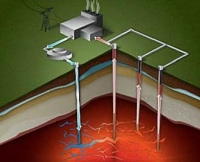 Washington, DC — A few weeks after doling out $70 million for much the same purpose, the Department of Energy (DOE), through its Geothermal Technologies Program, has announced another $11.3 million in grants will go to eight projects in five states in support of the research and development of advanced geothermal technologies. The awards will fund projects to be administered by companies in Texas, Connecticut and California (2), the Livermore and Berkeley National Labs in California and universities in Louisiana and Utah.

According to the DOE, the selected projects are part of the Department’s efforts to reduce the cost of geothermal energy in order to make the technology competitive with conventional sources of electricity. The money will allow awardees to conduct feasibility studies during Phase I, including technical and economic modeling and component design. If selected for Phase II, awardees would then validate the designs in real-world environments.

GeoTek Energy, LLC, headquartered in Midland, Texas, will receive up to $2.85 million to study the technical feasibility of a new generation of gravity-driven downhole pumps. The company’s Gravity Head Energy System (GHES) uses gravity to eliminate the need for extensive pumping requirements – in effect using electricity to make electricity – inherent to the binary cycle. It has the potential to improve the overall efficiency of a plant by 25-30%, and makes for a smaller surface footprint by placing the equipment downhole.

According to GeoTek’s Chief Operating Officer Ken Fryiear, GHES has been under development for several years and the grant money gives the company the opportunity to focus on that development. He added that GHES is to be tested in a pilot well currently being drilled in Nevada.

Westport, CT’s GTherm, Inc. will receive a rather modest award of up to $200,000. When contacted, spokesperson Irene Lebovics said that the company had just been made aware of the award, and did not know which of two applications had been approved. The company is awaiting clarification and is “excited about the grant.”

The money will fund the investigation into the technical feasibility, heat extraction potential, and cost impact of a single well geothermal system, which says little about GTherm’s technology. The company is developing Single Well Engineered Geothermal System or SWEGS, which is a very intriguing technology that pretty much takes everything you know about producing electricity from the earth’s heat and turns it on its head.

SWEGS does not need a water reservoir, and in fact the closed-loop system doesn’t need any water at all. And the working fluid in the loop boils at a lower temperature than water, so the technology can effectively generate electricity at 195°F. Drilling a few miles deep, this translates to the ability to generate electricity pretty much anywhere. By not requiring a water reservoir, SWEGS eliminates all the environmental and seismic issues inherent in advanced geothermal systems.

In California, Lawrence Livermore National Laboratory is in line for up to $874,000 to study producing geothermal energy at low cost and risk by integrating geothermal production with CO2 capture and storage (CCS) in sedimentary formations. Mike Brown, Assistant Manager for Sustainability and Infrastructure said the Lab’s proposal calls for combining CO2 injection, brine extraction and reverse-osmosis treatment and residual-brine reinjection to produce geothermal energy as well as fresh water.

Geothermal energy production can be limited by pressure depletion, and where CO2 storage is concerned, pressure build up is the limiting consideration. The project aims to show that CO2 injection can provide the pressure support to maintain geothermal well productivity, while the net loss of brine through desalinization provides pressure relief and improved CO2 injectivity.

The largest grant in the group by far will go to a sister facility, Lawrence Berkeley National Laboratory, also in California. They will receive up to $4.99 million for project titled “The Geothermal Energy Coupled with CCS (CO2 capture and storage): Heat Recovery Using an Innovative High Efficiency Supercritical CO2 Turboexpansion Cycle.” The project would develop new ways to produce electricity from superheated and pressurized carbon dioxide in deep geothermal formations. No one from the Lab was available to comment in time for publication.

In addition, no one was available to elaborate on any of the last four projects by deadline. In summary they are:

The Energy Department under the current administration continues to foster innovation and technical advances in renewable and sustainable energy systems including geothermal, all in hopes of achieving President Barack Obama’s goal of generating 80% of U.S. electricity from clean energy sources by 2035.

In the grant announcement, Energy Secretary Steven Chu said “Through these eight projects, the Department of Energy is investing in new technologies that will further develop the nation’s geothermal resources and help diversify our energy portfolio. By investing in geothermal research and development, we are investing in our nation’s energy future and creating opportunities for energy innovation in the U.S.”