More
Home Baseload Abolishing Food From Landfills: Could it Work in North America? 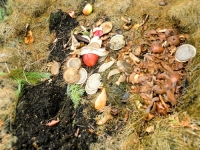 Achieving zero waste is a goal for many municipalities and organizations today, and a huge piece of that equation is food scraps, which typically make up 25 to 45 percent of residential waste in western countries. But is it really possible to eliminate all food waste from landfills? UK-based think tank CentreForum thinks so, and wants the UK government to lay down the law – literally – to make it happen.

The organization made headlines in July when it issued a report recommending that the UK ban all food scraps from landfills by 2020. CentreForum’s plan may be aggressive, but it also makes a lot of sense, especially when cost-effectiveness, renewable energy targets and other benefits are taken into account. The key is anaerobic digestion (AD): a technology that processes organic materials such as food scraps to create renewable energy and natural fertilizers.

AD, CentreForum argues, could produce more than 11 terawatts (TWh) of energy for the UK within the next decade, whereas the country produces 1.3 TWh of energy from AD today. The think tank recommends several legislative steps that would help break through barriers such as limited access to organic feedstocks and the high costs of connecting to the energy grid. Chief among these recommendations is the proposal that made headlines when the report came out: A government-imposed ban on all food waste entering landfills.

Strong voices like CentreForum’s are all well and good in the UK, but what about North America? In the United States, landfilling is still seen as a more viable option than in the UK, which diverts more than half of its waste (compared to 30% in the US). While the UK lags behind leading countries like Germany in AD advancement, they’re ahead of the US in adopting this critical technology. The US produced 541 million kWh of energy from farm-based anaerobic digesters in 2011 according to the EPA, while the American Biogas Council estimates that the potential for AD from farms is 8.8 Billion kWh.

North America can catch up: evidence suggests that North America is beginning to change its perceptions of organic materials. In the Fall of 2011, Portland, Oregon became the first American city to ban weekly trash pickups, shifting to weekly collection of “green” waste – organic materials including food scraps and yard trimmings – and bi-weekly collection of garbage. In the first quarter of 2012, Portland’s landfill waste decreased 44% due to the new policy. In addition, biogas, a flexible, methane-based fuel created through AD, is increasingly popular in North America according to a recent study by Pike Research, which also estimated that the global market for biogas would double in size to $33 billion within the next decade.

Harvest Power is building two of the largest AD facilities in North America, both of which are set to open later this year. These “Energy Gardens” will use organic waste streams to produce renewable energy in the form of biogas and natural, nutrient-rich fertilizers and soils. The company’s Energy Garden in Richmond, British Columbia (near Vancouver) recently received an Infrastructure 100: World Cities Edition Award from KPMG Global. If AD facilities like these processed only half of the food waste created by the US in a single year, the EPA estimates they would produce enough clean energy to power 2.5 million homes.

We may not be ready to completely ban organic materials from landfills (in North America or the UK), but CentreForum’s report signals activists everywhere to take AD seriously. The faster we embrace the value of organic materials and the opportunity of AD, the better our future looks, both economically and environmentally.