– Adapted from an article by ilse Zeemeijer in the “Financieel Dagblad”, the Dutch Financial Times –

“It’s the holy grail of scientists to make fuel from nothing.” Timo Roestenberg (29), researcher at the start-up ANTECY based in Hoevelaken the Netherlands, is proud. The company is developing a technology to convert CO2 and solar energy into liquid fuels, like for instance methanol.

There are a lot of hurdles to take, Roestenberg admits, but he is optimistic: ‘We have had some reasonable exciting breakthroughs. It is no longer just a wild idea. The company is developing a whole different future prospect.’

ANTECY, founded in 2010 is the second entrepreneurial venture of Paul O’Connor (56). In 2006 he founded the company BIOeCON, which developed technologies to convert biomass into sustainable energy and fuel. O’Connor: “I truly believe in biomass as a source for fuels and chemicals, but in the end biomass can probably replace no more than 10% to 20% of fossil fuels, because of shortages of fertile land and clean water. We were wondering if in the longer term it wouldn’t be possible to bypass biomass and switch to solar energy directly.” 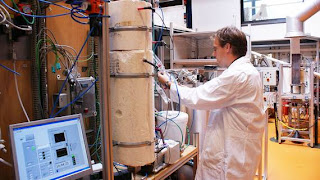 Timo Roestenberg, a post-doc at the faculty of Energy Technology at the University of Twente, was brought in to conduct the research. He explains: “Imagine, if everyone covers their roofs with solar panels. All of the solar energy is produced during the day, when you’re not at home. This is then given back to the energy grid. But if we all start doing this at the same time, the energy grid will be overloaded. We want to use this excess of electricity to produce liquid fuel, for instance methanol.”

As the costs of solar panels are dropping very fast this approach will be becoming more efficient. According to Roestenberg, methanol will be able to compete with fossil fuels in the 2020’s. Methanol has already been used as automotive fuel in Sweden and is used in Formula-1 racing cars.

The idea still sounds ‘wild’, Roestenberg admits. “It’s a complicated process. You start with solar energy and you end up with a fuel. This requires four components. You need to catch and concentrate the CO2 from air with a special device. Then you want to release the CO2 in a pure form. Next it is necessary to produce hydrogen from water using the solar energy and finally the CO2 needs to react with the hydrogen, resulting in methanol.”

Besides methanol the process ANTECY developed can also produce drinking water. “You can choose to produce less methanol and more water. That makes this application very valuable in countries around the equator that have a lot of arid land. They have a greater need for clean water than for fuel.”

In July two patent applications have been filed on the CO2 capturing and concentration part. Roestenberg: “We now know what all the pieces of the puzzle look like. They just have to be put together in an integrated process”. The following step will be the ultimate test: the development of a small-scale demonstration unit.

To finance this pilot, ANTECY is using the crowd funding platform SYMBID*. Of the € 100,000 that is needed, € 13,840 already has been invested. “If we were to let our self be financed in the usual way, we would have to deal with venture capitalists who are usually only interested in one thing: to make as much money as quickly as possible. Through crowd funding everyone becomes owner of the technology and we can pursue a longer term goal.”

O’Connor: “Crowd funding is a revolutionary new way of funding innovation, it is a fundamental part of ANTECY’s vision to pursue the financing of technology research like this. Obviously at some point we are going to need larger investors and companies to grow the innovation into a full business. But we do not want to involve ourselves with those too soon.” The € 100,000 at SYMBID is only the beginning. “In the next three years we plan to raise up to  € 3 million.” ANTECY cannot show any turnover figures yet. “The first years it is mainly investing, although we expect to have some prototypes for testing in the market soon.” The entrepreneurial side takes some getting used to says Roestenberg. “My strength lies in research. I was not born to persuade investors.” Roestenberg leaves that to his colleagues at ANTECY.

“It is all about having the right combination”, says O‘Connor. “Universities come up with lots of great ideas, but many are often too complicated or too expensive to execute. We believe a technology should have the potential to be easily applicable and competitive in order to become successful!”

Saša MariniÄ‡ and Paul O’Connor started ANTECY in 2010. O’Connor was already active in sustainable energy with the company BIOeCON, which works with biomass. In 2008 BIOeCON with Khosla Ventures, founded the American company KiOR, which produces renewable oil from biomass. KiOR went public with an IPO in 2011 on the NASDAQ.