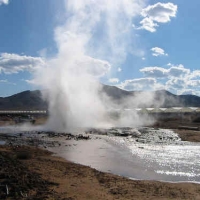 “This marks a critical turning point for the Department of Energy’s geothermal technology program, and responds to the clear direction given DOE by Congress when it passed the Advanced Geothermal Research and Development Act of 2007,” a leading industry group said.

With this announcement the U.S. government is now one of the largest investors in new US geothermal energy technology — a spot Google.org had held since it announced that it was investing heavily in the industry in August 2008.

“GEA applauds the Department of Energy for moving quickly on announcing these awards, which will accelerate geothermal technology development,” said Geothermal Energy Association (GEA) Executive Director Karl Gawell. “We hope that DOE will continue to make it a priority to complete contract negotiations with the winners so they can begin their important work as quickly as possible.”

The funding will support 123 projects, located in 39 states and defined in six categories. Twenty-four “Innovative Exploration and Drilling Projects” will receive a total of $98.1 million. Enhanced Geothermal Systems Components Research and Development/Analysis was the category that was awarded the next highest amount: $81.5 million for forty-five projects.

The money, awarded through the DOE Geothermal Technologies Program, will enable the boom of an industry that has been building strongly over the last few years now that federal incentives have finally recognized it alongside its renewable energy peers: wind and solar power.  The DOE geothermal program has not seen funding anywhere near this level since the late 1970s, and just couple of years ago the Bush Administration’s OMB sought to terminate the program entirely.

In response to the OMB’s death sentence, Congress passed — on a strong bi-partisan basis — the Advanced Geothermal Research and Development Act of 2007.  This legislation laid out the groundwork for an expansion of geothermal energy programs at the DOE and authorized over $400 million ($90 million a year for fiscal years 2008 to 2012) to fund research, development, demonstration and commercial application of new geothermal technologies.

And in addition to research funding, geothermal projects will benefit from a number of initiatives in the stimulus legislation Congress passed earlier this year.

Because many of these provisions required agencies to write new rules they are only now kicking in.  As a result, industry experts say they expect to see a major boost in new development in the coming year.  In September, GEA released an industry survey that found “a total of 144 projects under development that could add between 4,699.9 and 7,109.9 MW of power.”  It seems likely that next year will show an even stronger growth trend.

Of the power source, Senator Orrin Hatch (R-UT) told press: “What makes geothermal so positive is that it is just as clean as wind and solar, but it also provides a stable source of base-load power, which contributes to the reliability of our electric grid.  It also produces a lot of power for each acre of land, compared to some renewable energy sources.”

Geothermal energy can make significant contributions to US energy needs in the near-, mid- and long-term.  By making these awards, DOE is taking action to advance technology across the full spectrum of geothermal applications and needs, from production in oil fields to enhanced geothermal systems.

“We hope that DOE’s geothermal program budget will continue to support this range of technologies on a sustained basis in the future,” said Gawell.

What Will Companies Do With the Money?

The industry response has been abuzz since the awards were announced. Along with the private industry, academic institutions, tribal groups, local governments and national laboratories will now be able to move forward on carefully planned projects.

What will these institutions do with the money? They will develop new ways to sense commercially viable geothermal resources, so that exploration techniques can be improved and quickened. They will explore ways to capture and use the geothermal heat from existing oil and gas wells.

Potential EGS reservoirs will be explored and EGS technologies will be expanded and improved. A nationwide database will be established to improve the information and communication among geothermal associates. The ground source heat pump industry will be expanded. Geothermal comes in many forms, and the DOE has recognized this, due to the hard work of industry members.

A Landmark for the Industry and for the Nation

These new technology development projects, together with nearly 2,000 MW of geothermal power that could begin construction in the next year, will mean tens of thousands of new jobs for the economy and will lay the groundwork for tapping the enormous potential of our nation’s geothermal resources in the future.

DOE’s $338 million is a contribution that would have seemed a fairy tale just a few years ago, when the department’s geothermal division funding went down to zero. It is a landmark for the industry and for the nation.

In announcing the awards, DOE Secretary Steven Chu said: “The United States is blessed with vast geothermal energy resources, which hold enormous potential to heat our homes and power our economy.”

“These investments in America’s technological innovation will allow us to capture more of this clean, carbon free energy at a lower cost than ever before.  We will create thousands of jobs, boost our economy and help to jumpstart the geothermal industry across the United States,” he said.

“We believe geothermal energy holds a unique role in addressing the nation’s energy and climate change problems,” GEA’s Gawell stressed.  “In California, we are hoping that geothermal power can help the state become the first major world economy to back-out all of its coal.  No other technology can do this as effectively as geothermal energy.”