More
Home Baseload Bioenergy A Tribute to One of the Lions Who Helped Us Arrive Where... 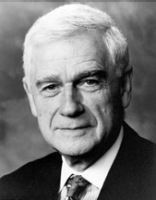 Washington – On Sunday August 8, former Senator Mark Hatfield, an anti-war Republican from Oregon, died at age 89. In his 30 years in the Senate, Hatfield was not only one of the Senate chamber’s most consistent voices against the war in Vietnam, but he was also an ardent advocate of environmental protection and renewable energy. In my nine years as a Senate aide in the 1970’s, I got to know him well.

During the 1980’s when President Reagan was trying to zero out the renewable energy and efficiency programs at the Department of Energy, pull down The White House Solar panels (within six months of his election), and firing Denis Hayes as Director of the Solar Energy Research Institute (now called NREL), politics for the green industries were pretty dismal.

We were in a political freefall, and I expect, the U.S. would have lost almost all federal programs had it not been for the resolve from the Chairman of the Senate Appropriations Committee, Mark Hatfield. I remember a meeting in his Senate office after the federal programs for renewable energy received two years of excruciating cuts, over 70 percent.  I told him then that if we went below this dismal point, it really didn’t matter anymore – the U.S. program would be all but dead. He listened somberly, announced he would draw the line – and he did so. Not only were renewable programs salvaged but some even increased under his oversight.

Not only did he hold the line, but when President Bush (#1) was elected, the whole tenor changed. Bush senior supported these programs, working with Senator Hatfield to increase the U.S. energy efficiency and renewable energy research capacity. Bush also supported an Energy Bill that extended renewable energy tax credits, thereby setting the foundation of policy  tools and incentives we enjoy today.

I read of the Senator’s passing with sadness, not only for the great actions he took on behalf of our industries, but the fact of what a genuinely good and caring person he was. This was a time when our leaders were actually leaders, not combatants. They took time to know each other, debate each other, socialize with each other — actually bask in the soup of politics and ideas.

So I hope you all take a minute to wish one of our early supporters well. If I could bestow a purple heart for renewable energy, Mark Hatfield would surely be one of the recipients.

For the last eleven years, Scott Sklar has run The Stella Group, Ltd. is a strategic technology optimization and policy firm for clean distributed energy users and companies. Scott Sklar is Chair of the Steering Committee of the Sustainable Energy Coalition and serves on the (non-profit) Boards of Directors of, the Business Council for Sustainable Energy, and the Renewable Energy Policy Project, and The Solar Foundation. Sklar is an Adjunct Professor at the George Washington University teaching a unique multi-disciplinary sustainable energy course. On November 4, 2010 Secretary Locke approved Sklar’s appointment to the Department of Commerce Renewable Energy and Energy Efficiency Advisory Committee (RE&EEAC). He can be reached at solarsklar@aol.com.