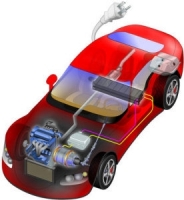 Minnesota, United States [RenewableEnergyWorld.com] A new report from the Institute for Local Self-Reliance (ILSR) proposes what the group said could be a silver bullet to kill the United States’ oil addiction. “Driving Our Way to Energy Independence” envisions a near term, dual-fueled transportation system, 75 percent powered by electricity and 25 percent by biofuels.

“An electric-biofuel transportation system is nearly oil free since only 2 percent of the nation’s electricity is generated with oil, while oil supplies less than 10 percent of the energy needed to grow crops and covert them into fuels,” said David Morris, ILSR’s Vice President and the report’s author.

According to ILSR, the move to this system is already taking place. In April, California mandated the sale of 60,000 plug-in vehicles. In early June, a Google-affiliated company, Hymotion, began the rollout of a nation wide network of certified converters of existing hybrids into plug-ins. In mid June, Toyota announced it would offer a plug-in hybrid in 2010. Meanwhile, Denmark and Israel have launched both initiatives to make all-electric vehicles the mainstay of their transportation systems.

“The future is now,” Morris said. “Ironically, the car, the driving force behind our current energy and environmental crises, may well become the vehicle for a more democratic and environmentally benign energy system.”

The full report, “Driving Our Way to Energy Independence,” is available online from ILSR.

Vermont digs in on incentives to boost geothermal heat pumps