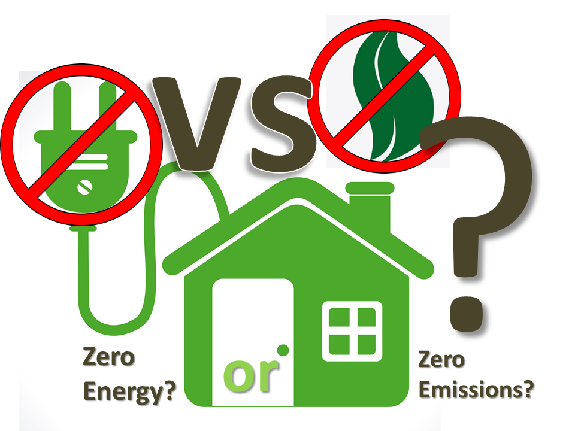 On the surface, it may seem that Net Zero Energy is the most responsible approach to building construction, but we may be missing the point…

The U.S. Department of Energy (DOE) released its findings in September 2015, “A Common Definition for Zero Energy Buildings,” which states that a Zero Energy Building is “an energy-efficient building where, on a source energy basis, the actual annual delivered energy is less than or equal to the on-site renewable exported energy.” The report has no measurement criteria for greenhouse gas (GHG) emissions, and in the report, it states that it “… does not tell the whole story of impacts from resource consumption and emissions associated with the energy use.” There is no further mention of GHG emissions, so in a Net-Zero building, combustion heating, a source of GHG emissions, may be employed.

The real culprit, according to most scientists of which I’m aware, is the GHG emissions, and it’s the reason that the world is collectively crying for emissions reductions. Though reducing energy consumption is important, reduction of GHG emissions is the key factor. The city of Vancouver, Canada, recently announced its intent to bypass energy efficiency standards and get straight to the heart of the matter by adopting the first Zero-Emissions Building plan in North America.

Building standards published by ASHRAE and LEED have driven down energy waste and consumption in new building construction, but, like the DOE’s definition of Zero Energy Buildings (above), they do not measure greenhouse gas emissions. Sometimes spending less on powering heating and cooling will yield lowered GHG emissions, but not always. In places where natural gas (NG) is cheap, it may seem favorable to switch to a NG furnace. However, more clean electricity is added to the electrical grid daily, and it’s being provided from solar, hydropower, wind and other renewable energy sources.

The DOE states in its report, “Site energy consumption can be useful for understanding the performance of the building and the building systems, but it does not tell the whole story of impacts from resource consumption and emissions associated with the energy use.”

The added electricity consumption typically helps the utility in the winter-time; this is because many cold climate electrical companies have high summer loads (from air-conditioning), but low winter loads (because of the gas-fired furnaces for heating). The winter electrical consumption levels the load out for the electrical utility. The increasingly renewable energy-powered electrical grid meanwhile is steadily reducing its GHG emissions as illustrated in the second figure.

Even if it costs less to switch from electricity to NG, we may be digging ourselves deeper into the GHG emissions hole by doing so. The problem is clear; that’s why Vancouver has decided on the new benchmark of Zero-Emissions as opposed to Zero-Energy.

According to the Paris Agreement (#COP21) to which the U.S. is committed, we understand that, “… long-term low greenhouse gas emission development strategies are the focus…” 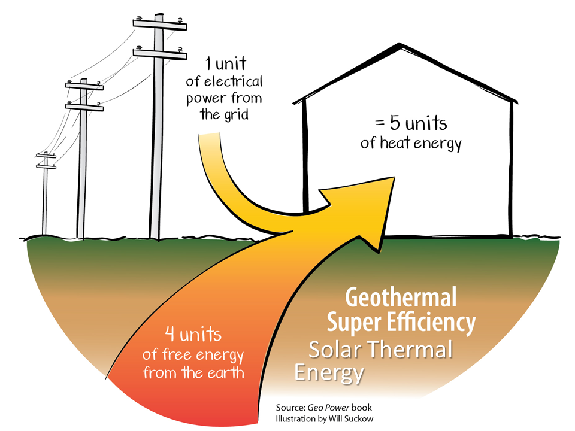 Geothermal heating and cooling is usually accomplished with a geothermal heat pump (GHP) or other earth-sourced refrigeration device. GHPs are employed worldwide and have been in operation for decades. Their energy source is the solar energy that is absorbed by the Earth.

Intuitively, we know that the temperature below the surface is going to be warmer than the winter-time temperatures in any climate, especially cold climates. That is primarily because of the solar energy that is absorbed and stored from the summer sun, meaning that geothermal heating uses solar-thermal energy, and the earth is the solar battery.

We have a simple “if/then” equation that we can solve: If the combustion of fuels creates GHG gas emissions, and geothermal heat pumps can replace combustion heating, then geothermal systems provide an answer to eliminating GHG emissions in buildings.

It seems simple enough, but as TVO asked recently, “Is Ontario’s gas expansion plan undermining its own climate strategy?” Ontario’s remarkable Climate Action Plan was reported in the news as requiring all new construction to employ combustion-free technologies by 2030, naming geothermal heating and cooling as a key element; now they seem to be unsure.

Speaking of a surplus of renewable electricity in Ontario, Energy Expert, Glen Estill wrote in this recent blog, “Instead of using oil, propane or natural gas to provide heat, we could use low-emission electricity to run ultra-efficient geothermal heat pumps.”

He goes on to say, “…What would be the result of switching to electricity for building heat [citing geothermal heating in his previous paragraph in the blog], or for driving, or for hydrogen production? We would have lower emissions and higher electricity demand using up surplus that we are wasting today.” Glen also noted that, “Importantly, greenhouse gas emissions from Ontario’s electricity sector are very low. Only 10 percent of Ontario’s electricity comes from a fossil fuel, gas.”

The choice of priorities does not exclude Zero-Energy or Zero-Emissions. Many folks achieve Net-Zero Emissions and Energy as Andrew Knox did in an average home, on an average budget in a Washington D.C. suburb. But given the choice, remember to start with a tight, well-insulated building, and utilize geothermal for the heating and cooling to reduce GHG emissions and energy consumption.

One thing remains certain, especially in colder climates; geothermal heat pumps provide the only reasonable solution to heating without combustion.

Special Thanks to PixyJackPress and Donal Blaise Lloyd for use of illustrations from the book, Geo Power (F3)