The next necessary decision about legislation – though it may be postponed by the oil spill catastrophe, potentially incendiary events on the Korean Peninsula and off the Gaza coast, the immigration question brought to a boil by Arizona’s excessive law and the Tea Party’s midterm elections intrusion – is whether the energy/climate bill that emerges from the Senate will drive the transition to a New Energy economy adequately to be worthy of support or whether it is such a sell-out to the Old Energies that no energy/climate bill at all is better.

The authors of the American Power Act (APA), Senators John Kerry (D-Mass) and Joe Lieberman (I-Conn), assert that it will: (1) cut the nation’s oil consumption and dependence on oil imports, (2) bring U.S. greenhouse gas emissions (GhGs) 17% below the 2005 level by 2020 and 80+% below it by 2050; and (3) move the U.S. toward international leadership in the New Energy economy and create 200,000+ new direct and indirect New Energy economy jobs yearly through 2020.

Climate Reality Check, a coalition of 15 staunch environmental advocacy groups, has coalesced in opposition to the Kerry/Lieberman bill. It is an impressive group of environmental stalwarts and they make substantial points. They call the Senate bill “…the wrong direction for U.S. climate and energy policy…” because it “…prioritizes reliance on offshore drilling and other dirty and dangerous technologies over effective pollution controls, clean energy, consumer protections, and creating real and just international climate solutions.”

Assessing the American Power Act: The Economic, Employment, Energy Security and Environmental Impact of Senator Kerry and Senator Lieberman’s Discussion Draft by economic analysts Trevor Houser, Shashank Mohan and Ian Hoffman, considers how effectively the provisions of the bill are likely to drive the realization of the authors’ claims for it. It sees benefits from the legislation in 5 key areas: (1) its energy sector changes, (2) its energy security implications, (3) its environmental impact, (4) its employment effects and (5) its impact on consumers. ::continue:: 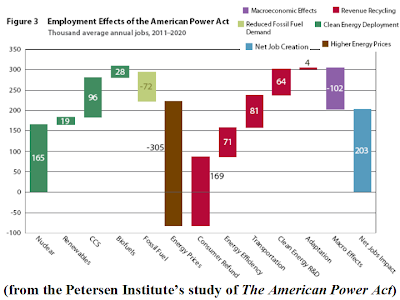 (1) The energy sector changes would come from the bill’s economy-wide cap and pricing of GhGs and its incentives that would drive the growth of New Energy and Energy Efficiency. It would reduce the fossil fuels from sources of supply from today’s 84% of U.S. energy to 70% in 2030. New Energy would be 16% of U.S. energy in 2030 and nuclear energy would be 14%. 106 gigawatts of New Energy, 78 gigawatts of nuclear energy, and 72 gigawatts of “clean” coal (from carbon capture and sequestration (CCS) technology) would be built in place of the present fleet of dirty coal plants. New Energy Efficiency deployment in homes, businesses, and vehicles would cut overall energy demand 5% from 2030 business as usual (BAU).

(2) Energy security would be significantly increased by provisions in the bill that would cut U.S. oil imports 33-to-40%, 9-to-19% below 2030 BAU. This would decrease U.S. spending on imported oil $51 billion per year. It would drive global oil prices down and cut revenues to oil producers revenue by $263 billion per year by 2030.

(3) The core of the American Power Act is its cap and price on GhGs that gradually becomes economy-wide and reaches $55.44 per ton in 2030. The combined effect would be, according to the analysis, to achieve the targeted GhG-cuts (17% below the 2005 level by 2020, etc.)

(4) With unemployment high and elections coming, jobs are at the top of November’s electoral agenda and Democrats will likely try to represent APA as a jobs bill. Is it? Peterson says answers are “all over the map” but the best analysis suggests that because the bill adds $22.5 billion more than 2030 BAU to power generation investment, it would result in the creation of an average of 203,000 new direct and indirect jobs per year through 2020. Though job creation might fall off between 2020 and 2030, the productivity from 10 years of economic expansion would likely lead to offsetting sustained growth.

(5) The price on GhGs would clearly impact consumers by its 2-to-5% household energy price increase through 2020 and 3-to-7% increase through 2030. Energy Efficiency improvements that cut utility bills and vehicle fuel costs are expected to offset some or all such impacts. Mirroring most other studies, Peterson concludes the GhG-price would likely cause a per household impact that falls between a $136 per year increase and a $35 per year decrease. Revenues raised through the sale of emission allowances will also be rebated to offset the worst impacts.

In its essence, the debate over the bill is not about megawatts and tons of emissions but about political ideology. Those who accept politics as the art of the possible tend to believe this is the best energy/climate bill they can get in the current political atmosphere and are fighting for it. Those who believe politics is the extension of war by other means tend to reject it in the belief that what is politically possible is less important than what the earth needs.

The President just announced he will join the fight to get this bill passed in the same way that he took on the fight for health insurance reform and financial reform. That means the coming months will see exciting action. NewEnergyNews remains interested in details about the legislation and is not yet prepared to endorse or reject it. Remember this: A lot of seasoned pols have lost big by betting against this President. 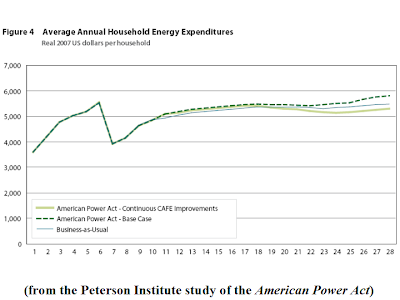 This post is based on Assessing the American Power Act: The Economic, Employment, Energy Security and Environmental Impact of Senator Kerry and Senator Lieberman’s Discussion Draft by Trevor Houser, Shashank Mohan and Ian Hoffman (May 2010, Peterson Institute for International Economics)

Report: its now cheaper to build new solar than to run existing coal plants in China, India and most of Europe