The New Energy economy is bringing people together.

Groups of counties with overlapping resources and markets in common are coming together in regional coalitions to facilitate broader based growth.

Buffalo Niagara: Where Industry Creates Energy; A comprehensive report on the green economy & Western New York’s alternative-energy manufacturing potential describes the enormous potential in an 8-county region of Western New York state where business and community leaders want to use the powerful viability of New Energy and Energy Efficiency to turn around the decaying economy of a once-vibrant manufacturing region. ::continue:: 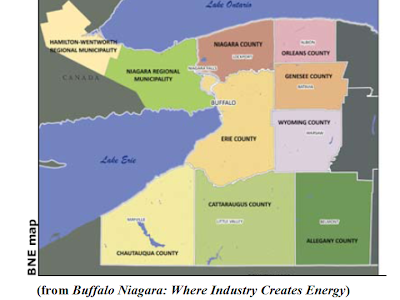 Regional collaboration offers the opportunity of expanded economic development through linkages and synergies between clusters of research & development, manufacturing and production, distribution service and support businesses throughout a region.

But 2 years of marketing surveys and research by KWR International suggest the regeneration of the region as a manufacturing hub for New Energy (NE) and Energy Efficiency (EE) technology can be accompanied by a restored capacity for domestic, emissions-free energy generation that will thereby regenerate a long list of local economies. The region is rich in wind and has substantial solar distributed generation potential. In addition, it has barely begun to discover its hydrokinetic, geothermal, biomass and biofuels resources, all of which can be produced locally, therein supplying opportunities for local manufacturing, production and support services.

(1) The formation of a region-wide “Green Team;”

(2) The development of a “soft infrastructure” of incentives and initiatives to establish a “green identity;”

(3) A dialogue across institutions, organizations and businesses on NE and EE; and

(4) The development of an integrated regional initiative as the foundation of a regional action plan and agenda.

The study points the way. The question remaining is whether the region’s leadership can turn the very real and substantive potential it defines into dollars and cents in the forms of economic growth and job opportunity. That is the human factor. 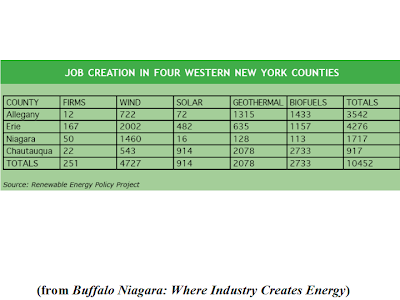