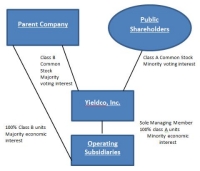 Yieldcos seem to be the renewable energy financing mechanism in vogue lately. As the newest 2014 headliners, TerraForm Power and NextEra Energy attract media attention, and NRG Yield continues to exceed expectations, many industry stakeholders are asking: what is a yieldco and why is it attractive from an investment and finance perspective? To answer these questions, this article summarizes key elements of the yieldco structure and provides an overview of the current U.S. market.

A yieldco is a dividend growth-oriented public company, created by a parent company (e.g., SunEdison), that bundles renewable and/or conventional long-term contracted operating assets in order to generate predictable cash flows. Yieldcos allocate cash available for distribution (CAFD) each year or quarter to shareholders in the form of dividends. This investment can be attractive to shareholders because they can expect low-risk returns (or yields) that are projected to increase over time. The capital raised can be used to pay off expensive debt or finance new projects at rates lower than those available through tax equity finance, which can exceed 8 percent.

The case for yieldcos can be compelling, especially as an alternative to master limited partnerships (MLPs) and real estate investment trusts (REITs). Yieldcos, sometimes referred to as “synthetic MLPs,” are structured to simulate the avoided double-taxation benefit of MLPs and REITs. This means that rather than taxation taking place twice (once at the corporate level and again at the shareholder level), the yieldco is able to pass its untaxed earnings through to investors. This is achieved by matching strong positive cash flows (income from assets) with losses that exceed taxable income (losses due to renewable asset depreciation and expenses). These “net operating losses” reduce the company’s taxable income so that the company is taxed on lower annual earnings, or may not even owe taxes at all. Net operating losses can “carry forward” for future taxable events and therefore, many yieldcos do not expect to pay significant income tax for a period of years.

Additionally, dividends may also receive favorable tax treatment at the shareholder level if the returns are treated as return of the original investment, as opposed to return on investment. When earnings are taxed at only one level, the company is able to raise capital from shareholders more affordably. Class A Common Stock shareholders typically receive a 1099-DIV form for tax purposes, rather than the K-1 form associated with MLPs. This is good news for many investors accustomed to the K-1, which can be cumbersome across multiple states and have limitations on utilization in a tax return.

Below is a general representation of the yieldco organizational structure, adapted from NRG Yield. The parent company must own a majority share of the yieldco (Class B Common Stock), while public shareholders are entitled to a minority share (Class A Common Stock).  The revenue generated from projects owned and/or operated by “operating subsidiaries” is passed through this structure to deliver returns to shareholders. 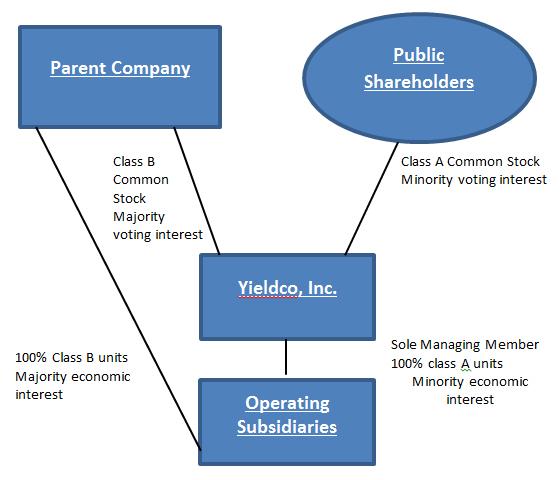 Renewable energy projects face some uncertainty during the development stage but tend to produce low-risk cash flows once they are operating. Yieldcos have the potential to unlock the value of these renewable assets. Yieldcos may attract new investors who may otherwise perceive unacceptable risk or lack the appropriate channels to invest capital in renewables. In exchange for the opportunity to invest in relatively low-risk assets, yieldco investors typically receive 3 percent to 5 percent returns and long-term dividend growth targets of 8 to 15 percent. For instance, TerraForm Power’s prospectus targets a 15 percent compound annual growth rate in CAFD over a three-year period.  Investor return is directly linked to the operating performance of the underlying assets and the resulting CAFD, 70 percent to 90 percent of which is distributed as dividends.

Each yieldco establishes a dividend policy and method for calculating CAFD; a generalization based on NRG’s CAFD calculation is illustrated in Figure 2 below. Generally, a yieldco will distribute quarterly earnings (in the example below, $40M million), less: interest and tax paid, maintenance capital expenditures, and principal payments on existing debt ($26 million), and reserves for prudent conduct of business ($3 million). About 70 to 90 percent of the remaining CAFD ($11M) is paid out shareholders.

Which Companies Can Use the Yieldco Model?

Table 1 presents the current landscape of yieldcos in the United States (each yieldco listed has at least one project operating in the United States, but many have projects in their portfolio operating outside the United States as well). Each yieldco’s portfolio is assembled according to each parent company’s expertise and the desire to balance income with tax benefits. Some yieldcos have chosen to include conventional assets, while others have elected to remain a pure-play renewable. Since 2013, yieldcos have acquired over 8 GW of assets in their portfolios (renewables account for 78 percent) and have raised a total of $3.8 billion.

For a developer interested in this structure, Martin suggests that a yieldco hold at least $500 million in operating project value and enough shares sold to raise at least $100 to $200 million in the initial public offering. Diversification of risk related to construction, system operation, offtaker creditworthiness, and geography may strengthen portfolios. For instance, all of the yieldcos listed in Table 1, with the exception of NRG yield, own a combination of U.S. and non-U.S. assets with varying offtaker characteristics. It is good to keep in mind that the portfolio is more likely a function of the yieldco’s business model and the parent company’s management expertise, and not “one size fits all.”

For example, TerraForm Power’s portfolio contains many small- to mid-size distributed generation (DG) projects. Two of the most notable assets within TerraForm’s initial portfolio are the 46.5 MW “U.S. Projects 2014” and 19.6 MW “Summit Solar Projects.” Each project is a conglomeration of 42 and 50 sites, respectively, with offtakers that include utilities, municipalities, commercial, and governmental entities. This profile differs from a yieldco portfolio like NRG’s, which houses a mix of large, conventional, utility-scale solar and thermal projects.

In order to retain favorable tax benefits and steady yields, the yieldco business model calls for acquisition of new generation assets as initial portfolio assets approach their contract expirations. This pipeline of assets, or “drop downs,” is intended to fuel the yieldco with stable cash flows to deliver above-average dividend growth with below average risk. This drop-down schedule is critical to maintaining cash-flows and beneficial tax treatment and subsequently, is essential to the yieldcos future growth and viability as a long-term financing structure. To reduce the uncertainty of future cash flows and ensure access to assets, agreements such as right of first offer or call rights are common between the yieldco and the parent company. Yieldcos can continue to schedule drop downs for as long as the company wishes to maintain its tax advantaged status and sufficient supply of new operating assets exist or until the business strategy dictates otherwise.