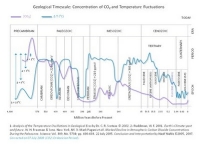 Go ahead — call me a hypocrite. I claim to be a cleantech venture capitalist yet I tell you here and now that I am not convinced of anthropogenic (human-caused) climate change (aka global warming). And I will audaciously tell you that my convictions on climate change in no way run contrary to my strong belief in the need for a cleantech revolution.

At the same time, those on the other end of the spectrum are equally religious in their fervor and certainty that anthropogenic global warming is a fraud.  They are certain that human emissions of carbon dioxide and other “greenhouse” gases could never impact our climate.  And they may twist this post to use it as yet another data point against claims of global warming and added rationale to do nothing except increase fossil fuel exploration.

In both groups, it is my perception that most have read little about the topic other than the popular press.  And I find both groups equally sad in their myopic viewpoints.  If both of these camps would open their eyes, I suspect there would be much greater agreement on the need for action on clean technologies rather than the divisiveness that their polarizing views create.

There are solid scientific theories and extensive data, anchored by the UN Intergovernmental Panel on Climate Change Report, that indicate the possibility that over time man-made emissions of greenhouse gases could impact the global climate and may have already begun to do so.  To dismiss them out of hand because there is some reasonable doubt is irrational.

Similarly, to speak about anthropogenic climate change as a certainty or to claim that there is no disagreement among scientist is simply incorrect.  There are large numbers of reputable climate scientists who remain unconvinced.  The reality is that all predictions of global warming are based on very complex climate models. We can forecast the weather a few days out with reasonable accuracy but if you try predicting next year’s summer temperature — let alone long-term global climate conditions — things fall apart quickly.  Long-term climate models are anything but accurate.

We know with certainty that past natural occurrences have caused significant changes to the atmosphere, resulting in climate changes.  So, there is little question about whether changes in the atmosphere can cause climate changes.  Rather, the question is whether man-made emissions are significant enough to cause a change on their own and to overcome the large natural forces on our climate that include sun spots, variations in the earth’s orbit, and volcanoes all of which have not been taken into account in forecasts of global warming.

Often there is a focus in the media on recent variations in climate as a source of evidence for anthropogenic climate change.  Variations in climate over short periods of time are highly suspect as evidence. While most scientists seem to agree that there have been increased temperatures and other climate changes over the past century or so, what cannot be said with certainty is that the increased CO2 levels caused this as opposed natural climate change events that have and continue to happen regularly to our planet.  Even the UN Intergovernmental Panel on Climate Change report, which is the backbone of support for anthropogenic climate change, found that its confidence in human contribution to such measured weather events (e.g., temperature, severe storms, sea level, etc.) could be as low as 50 percent for most of the events and 66 percent for the others (pages 23 and 52 of the Technical Summary).

Climate change is measured over extremely long periods of time — not a few years or tens of years.  Some of the best long-term data on historic CO2 concentrations and temperatures is derived from glacial ice core data that spans back 400,000 years.  This data shows that the concentration levels of CO2 in the atmosphere today are strikingly more than 20 percent higher than any level measured in the past 400,000 years (See Figure 1).  The recent rapid increase corresponds well with the industrial age and temperature variations are in high correlation with CO2 concentrations. This is hard data to ignore or simply write-off. 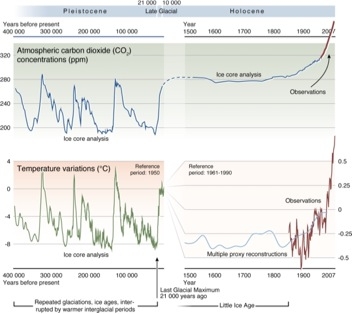 But interestingly over longer periods, the level of CO2 today is far below the estimated levels during many times in history (Figure 2) raising the possibility that the current spike may have other natural contributors.  And the correlation between temperature and CO2 that seems so apparent in the 400,000-year ice core data becomes much less clear when looking over many millions of years. 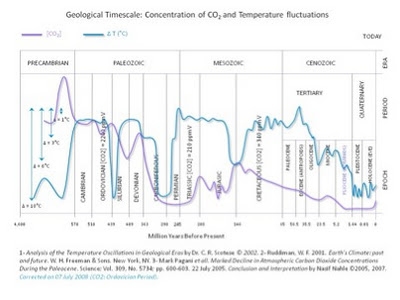 While most scientists seem to believe that, in isolation, increased CO2 concentrations create an increased “greenhouse” effect whereby the CO2 acts like a blanket, preventing more of the heat radiated by the earth from going back into space, at what concentration level and over what time period remains a point of uncertainty and debate. In addition, how other factors that may occur with warming such as increased moisture and clouds as well as changes in absorption of CO2 into the ocean at varying temperatures will affect the warming dynamic and other climate change is much more uncertain.

The bottom line is that we won’t truly know if man has caused climate change until after it has already occurred for a very long period of time.

And that’s the rub.  The theoretical costs to the human race of global warming are high: rising ocean levels, decreased polar ice, increased severe weather and significant changes in precipitation patterns.  If they occurred to a significant degree, all could have sizeable economic and health implications.  But there is no certainty that we will ever pay such a price. More compelling is what we know with near-certainty:

To claim with certainty that man is causing climate change or to claim there is no risk of anthropogenic climate change are equally incorrect and equally polarizing.

While it is not certain, there is evidence that suggests that human emissions of greenhouse gases may be changing our climate in ways that could have dramatic impacts.  We can do nothing and roll the dice that everything can be OK.  Or we can take steps to diversify our energy sources away from fossil fuels and increase our energy efficiency, thereby not only reducing the risk of anthropogenic climate change but also increasing the robustness of our economy and our national defense.

Although there should be debate about the specifics of how to best advance the availability and utilization of cleaner technologies, support for cleantech innovation should be the ultimate bipartisan issue without the divisiveness created by talking about anthropogenic climate change as if it is a fact or as if it is fiction.