The other such sustainable REIT is Power REIT (NYSE:PW), which I have written about extensively.  PW is both illiquid and involved in significant litigation, two factors which may put off the conservative investors who gravitate towards REITs.

HASI, on the other hand, has market capitalization approximately ten times larger than PW, and traded over five million shares on its first day. That is about as many shares as PW trades in nine months.  HASI’s liquidity will fall as its shares enter the hands of long term investors, but the company will remain far more liquid than PW.

Hannon Armstong has long been a leader in financing sustainable energy projects.  The company is a fixture at clean energy financing events, and its partners have impressed me with their level of knowledge in our conversations at such events.

By going public and converting to a REIT structure, HASI is tapping a pool of relatively low-cost capital from small investors.  Many small US investors have previously had few opportunities to invest in sustainable infrastructure.  The most comparable investments I know are solar-backed loans from Solar Mosaic, and PW.  Those few of Mosaic’s  loans available to small investors sell out quickly, and are currently limited to investors in California and New York State.  Further, these loans cannot be purchased within a retirement plan such as a self-directed IRA.  HASI will have none of these problems; I have purchased small amounts of HASI in IRAs and a brokerage Health Savings Account which I manage.  REITs are particularly suited as investments in such tax-sheltered accounts because their distributions are not “qualified dividends” and are taxed as income.  The interest on Mosaic loans (4.5% on recent offerings) is also taxed as income, but cannot be purchased in a tax-sheltered account.

Hannon Armstrong’s business is arranging finance for sustainable energy projects.  Jeffrey Eckel, the company’s  President and  CEO defines these as projects of sufficient quality which reduce carbon emissions.  Such projects include the installation of sustainable HVAC equipment as well as (potentially) clean energy generation such as solar and wind farms.  Such projects are not the typical investment which you would normally expect to find in a REIT, but there has been some ambiguity regarding how photovoltaic solar and similar infrastructure should be treated.

In an interview, Eckel told me that the IRS issued a private letter ruling detailing exactly what types of such infrastructure HASI will be able to invest in and maintain REIT status in July 2012.   The issue of what sorts of renewable energy projects are suitable for inclusion in a REIT is of great interest among developers and financiers over the last few months.   Joshua Sturtevant, an Associate with solar aggregator, financier, and developer Distributed Sun of Washington, DC, tells me that “based on its historic approach to issuing private letter rulings, I am skeptical that the IRS will go far enough in any of the new rulings to enable broad-based direct investment in development-stage solar projects. Some of the existing rulings could conceivably benefit certain individuals who are making requests to address specific boutique structures, but it is not likely that anything that has been issued will lead to the sea change that many in the industry are hoping for. ”

In the event, Sturtevant may have been too pessimistic.  Not only did HASI request and receive their ruling before many industry observers were even talking about the possibility, but it seems to be quite comprehensive.  Eckel has not been forthcoming about its contents: He told me, “
We’re keeping the ‘private’ in ‘private letter ruling.’” However, he did say that, while the ruling is very specific to what Hannon Armstrong does, it allows the company to continue its existing business investing in solar, wind, geothermal, and energy efficiency infrastructure as a REIT.

All that means that solar, wind, and geothermal can be suitable REIT assets.  Since Hannon Armstrong does not have to significantly change the way it structures deals and manages its portfolio, other REITs may also be able to make similar investments without a prohibitive number of convolutions.  More details of the exact requirements will emerge as more PLRs are issued, and when HASI’s ruling is published by the IRS.

HASI as an Investment

Now that the IPO is complete, HASI intends to invest the funds in eight sustainable energy projects which they have lined up and ready to go.  Eckel told me that they expect their investment mix will not change significantly now that they are a public REIT, so we can expect these new projects will roughly mirror their current portfolio of managed assets. 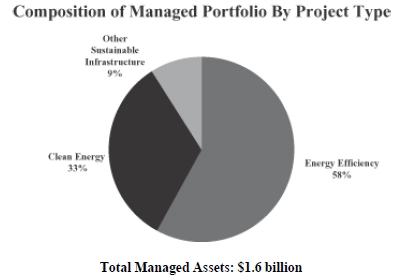 Roughly a third of the projects will be invested in renewable energy such as solar, wind, biogas, and geothermal, with the balance in energy efficiency projects and other sustainable infrastructure.  Because Eckel specifically mentioned “baseload renewables such as geothermal” as a sector he is particularly excited about, I would not be surprised if at least one of the eight initial projects is geothermal.

If HASI funds multiple geothermal projects over the next few years, this could be excellent news for geothermal developers with projects in the United States, such as Ormat (NYSE:ORA), Ram Power (TSX:RPG, OTC:RAMPF), and US Geothermal (NYSE:HTM).

Hannon Armstrong is still in a quiet period because of their recent IPO, so Eckel was unable to tell me anything about their likely earnings prospects or planned dividends.  We do know that the company earned $0.60 a share in 2012, and that they intend to distribute 100% of their REIT earnings as dividends to shareholders.  REIT earnings are defined by the IRS, and will differ in some respects from the GAAP earnings.  In addition, the IPO has increased HASI’s share base six-fold, meaning that the profitability of the new investments will dominate earnings going forward.

That said, the mix of HASI’s projects will not change going forward. The main difference will be that the improved ability to raise equity means that the REIT will retain a larger stake in projects it finances.  This could increase earnings per share if it allows more profitable deals which might not have gone through without HASI having skin in the game, but it could also dilute earnings if the income HASI earns by managing projects is diluted over a larger equity base invested in the projects themselves.  That said, HASI’s partners would not have taken the firm public if they thought it meant they would earn significantly less than they would have had the firm remained private.

One other factor to consider is the pricing of the IPO.  HASI priced at the low end of the $12.50 to $17.50 range in the prospectus.  Because of that, they will be able to invest less new money per share than they could have if it had priced higher, which will lead to lower earnings per share than we could have expected at a higher IPO price.  On the other hand, new investors are paying less for the earnings from HASI’s existing business.  After dilution from new equity, 2012 earnings would amount to approximately ten cents a share.  According to the April 19th prospectus update, HASI netted $9.70 per share from the IPO, after dilution of the new money and estimated expenses.   Assuming they can invest this at a yield between 5% and 8%, we can expect total earnings per share to be between $0.58 and $0.87 per share, all of which we can expect to be distributed as dividends.

At the current price of $11.25, HASI will have a dividend yield of between 5.1% and 7.7% if my assumptions are correct.  A quick survey of the top 10 holdings of the SPDR Dow Jones REIT ETF (NYSE:RWR), shows that these REITs yield between 2.6% and 4.2%, so I expect HASI will appear attractively priced in comparison to other REITs when it starts paying dividends, assuming it does not appreciate before then.  It should also be attractively priced in comparison to the green infrastructure investments I mentioned earlier: Loans from Solar Mosaic yielding 4.5% and Power REIT, which yields 3.9% at $10.20.

I can’t help but be enthusiastic about Hannon Armstrong Sustainable Infrastructure Capital.  The REIT presses all my buttons:

This article was first published on the author’s Forbes.com blog, Green Stocks on April 22nd and AltEnergy Stocks and was republished with permission..