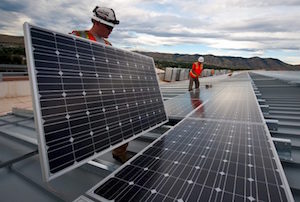 Last week, the U.S. inaugurated a new president who has vowed to abandon the landmark Paris climate agreement and roll back bedrock American environmental protections.

But turn to the states and you’ll find a different story, even in the red states that elected President Trump. In fact, Republican governors in the Midwest are prioritizing economic growth and job creation by accelerating investments in energy efficiency and renewable energy. In the few weeks after the election, leaders in Illinois, Ohio, and Michigan have adopted new policies that help tackle climate change and grow the clean energy economy.

With passage of the Future Energy Jobs Bill, Illinois sent an important signal to the rest of the nation: We can create policies that grow the economy, save customers money, and protect the planet.

Supported by a Republican governor, Bruce Rauner, and a Democratic legislature, the law will lead to $12-15 billion in additional private-sector investment coming to Illinois and create tens of thousands of new jobs. The bill includes provisions for doubling the size of the state’s energy efficiency portfolio, which will lower customers’ electricity bills, and building 4,300 megawatts of new wind and solar generation by 2030.

These advances put Illinois on track to achieve a nearly 56-percent reduction in greenhouse-gas emissions from the power sector, well beyond what the Clean Power Plan — the nation’s first-ever limit on carbon pollution from power plants — would require. Gov. Rauner said the legislation “allows us to protect jobs, ratepayers, and taxpayers.”

In nearby Ohio, Republican governor John Kasich in late December vetoed legislation that would have gutted efficiency and renewable investments in the Buckeye State.

The Ohio legislators behind the bill sought to challenge climate science and restrict competition in electricity markets. But Gov. Kasich stood up to that extreme position, seeking to advance economic development and customer choice instead. Of the decision, Gov. Kasich said, “Ohio workers cannot afford to take a step backward from the economic gains that we have made in recent years.”

In Michigan, Republican governor Rick Snyder recently signed a bill that extends and improves the state’s efficiency and renewable standards. The bill, adopted by a Republican legislature, removes the existing cap on energy efficiency program spending, adds tiered incentives to encourage utilities to exceed the efficiency target, and increases the previous Renewable Portfolio Standard requirement for clean electricity from 10 to 15 percent. Gov. Snyder said, “This was one of the finest illustrations of good, bipartisan, and broad-based work I’ve seen in my time as governor.”

These recent bipartisan advances reflect not only a stronger coalition of environmental and clean energy advocates, but also well-organized groups of major corporations seeking investment and cost-saving opportunities from. Finally, they reveal growing support from conservative groups, who want customers to enjoy energy options and markets that allow new competitors to thrive.

As federal leaders back away from climate action and to make our air and water dirtier, Midwestern Republicans are advancing policies that lower harmful pollution and help people save money on their electric bills, while spurring private-sector investment, creating jobs, and saving billions of dollars in wasted energy. These commitments, moreover, are occurring in the very region that proved so critical in the presidential election. The new administration would be wise to listen to fellow Republicans and embrace clean energy’s economic promise.