More
Home Blogs 2009, the Fight for New Energy & Why the Wind Industry Wins...

2009 will be remembered as the year the New Energy industries fully joined the rising grassroots movement that is now really beginning to stand back the Old Energies.

The new administration came in this year with a rush and with a New Energy-boosting Recovery Act that is still having reverberations and driving growth.

In Chicago, in the spring, WindPower 2009 was the biggest New Energy conclave ever. The wind industry hosted a coterie of Midwestern governors who stumbled over themselves prevailing on wind to build in their states. And the industry brought oil & gas billionaire-turned-wind developer T. Boone Pickens to the convention as a keynote speaker to show the fossil fuels they are yesterday’s party. ::continue:: 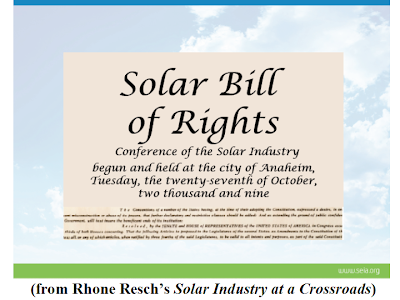 The geothermal, hydrokinetic and algae biofuel associations fought harder than ever in 2009 for recognition on the national stage, joined the solar and wind associations in the struggle against recalcitrants in the U.S. Congress and helped push a groundbreaking energy and climate bill through the House of Representatives.

But by far the biggest story of 2009 was that the No-New-Coal movement, born of grassroots activists in 2005, defeated its 100th proposed coal plant and took on unprecedented momentum. The “there’s no such thing as clean coal” media campaign found spokesmen in Jon Stewart, Steven Colbert and other late night comedians and it won adherents from YouTube audiences around the world.

The floundering economy has slowed New Energy’s progress. And the Old Energies won’t roll over without a brutal struggle, as evidenced by the vulgar tactics of the blowhard American Coalition for Clean Coal Energy (ACCCE). But what the events of 2009 demonstrated is that even the staunchest of fossil fools can’t hold back history. 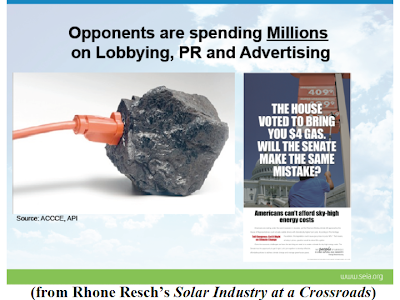 The triumph of the U.S. wind industry – the U.S. has built more wind power to date than any other country in the world – is a tribute to a particular way of fighting for New Energy. It is a 2-part approach.

The first part is to keep building, no matter what. The wind industry has developed unimpeded by any criticism and has slowed only when the federal government pulled the carpet out from underneath it.

The second part is to look directly at criticism with a cold hard scrutiny. If there is truth in it, what is there to learn? If there is not, how can the real truth be effectively told?

2009 is exemplary of the first part. The wind industry saw the economy unraveling and the capital for project finance disappearing and went into action. Along with the solar industry, it led New Energy’s fight for revised federal benefits and, as a result, is coming out of the recession still building. 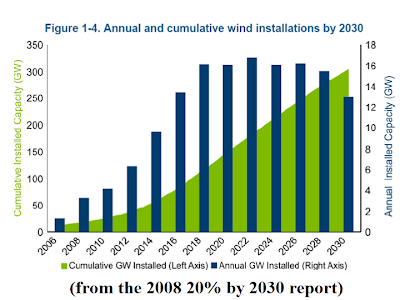 Wind intends to keep on building until it is supplying 20% of U.S. power in 2030. (click to enlarge)

December has seen the release of 2 highly substantial studies exemplifying the second part of wind’s victory plan, a frank response to criticism. Wind Turbine Sound and Health Effects; An Expert Panel Review is a panel of experts’ highly researched negation of unsubstantiated claims, circulated for years and reiterated in a recent, poorly documented book, that the noise of wind turbines causes health impacts and something called “wind turbine syndrome.”

The panel of experts negates the unsubstantiated claims with old-fashioned facts demonstrating there is no basis for such a syndrome or any other harm to human health from properly sited wind turbines.

The doctors and other health professionals on the panel concluded: (1) The sounds and vibrations emitted by wind turbines have no unique endangering quality. (2) Knowledge about sound and health is substantial. (3) That substantial accumulated knowledge offers no evidence the audible or subaudible sounds from wind turbines have “any direct adverse physiological effects.”

The Impact of Wind Power Projects on Residential Property Values in the United States: A Multi-Site Hedonic Analysis is a thoroughly documented paper from researchers at the Lawrence Berkeley National Laboratory (LBNL) that negates long-muttered suggestions by wind’s enemies that nearby projects somehow diminish home values with thoroughly calculated statistics showing there is absolutely no such harm to real estate prices.

They concluded that there is no evidence that any of the 3 stigmas having “any consistent, measurable, and statistically significant effect” on home values. 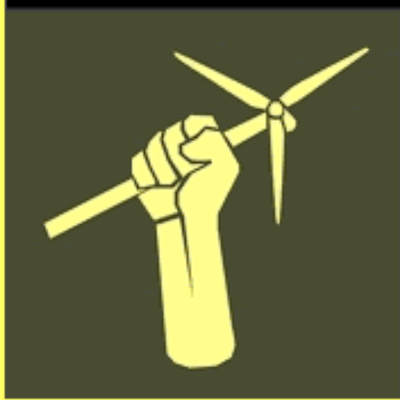 Click thru for more on this and much more NewEnergyNews