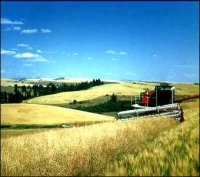 Washington, DC [RenewableEnergyAccess.com] The passage and subsequent presidential signature of the Energy Policy Act of 2005 this past August was a watershed moment for the renewable fuels industry, the impacts of which may not yet be fully appreciated, but will provide immeasurable benefits to the nation for generations.

The energy bill contained a nationwide Renewable Fuels Standard (RFS), requiring refiners to utilize an increasing percentage of renewable fuels such as ethanol and biodiesel in their motor fuel mix. The RFS begins in 2006 with a 4 billion gallon requirement, and increases through 2012 to 7.5 billion gallons. It is a flexible program, allowing refiners to choose when and where they use renewable fuels, but it is the most aggressive effort the country has yet made to promote the use of biofuels. Indeed, the RFS was the engine that drove the energy bill to the president’s desk. Without the broad bipartisan support for the RFS, the U.S. might still be without a comprehensive energy policy, and might still be blithely moving toward even greater dependence on imports for our nation’s energy supplies. According to an analysis completed for the RFA, the RFS will reduce the need for some 2 billion barrels of crude oil. That may not be a panacea, but it is an important first step toward recovery from the addiction to oil that has plagued this country for decades and threatens our economic future. The 7.5 billion gallon RFS makes an unmistakable statement about America’s commitment to reducing our dependence on imported oil and developing domestically produced energy resources that will lead this country toward some semblance of energy security. The energy bill and the RFS could not have come at a more important time, because 2005 may one day be remembered as the year world oil production peaked. Several oil industry analysts are suggesting world oil production has reached its apex and the era of cheap oil is over, and the recent Annual Energy Outlook for 2006 from the U.S. Energy Information Administration seems to agree. According to EIA, oil prices will remain over $45 a barrel for the foreseeable future due in part to increased global demand and decreasing supplies of crude oil. The timing of the RFS and the rapid expansion of the U.S. ethanol industry will go a long way to mitigate the economic impacts high oil prices have on domestic energy prices. Ethanol in particular will help stretch gasoline supplies, reducing the amount of imported oil America requires, and help keep consumer prices down at the pump. While this federal action was the crowning achievement, several other factors helped to propel ethanol to new heights in 2005. The motor fuels market continues to hemorrhage methyl tertiary butyl ether (MTBE) from the marketplace, with more and more states looking to ban its use. Ethanol has proven to be a cost-effective replacement. Greater attention is also being placed on the use of alternative, renewable fuels. E85, an 85 percent ethanol blend, is carving out a larger share of the marketplace as major automakers have announced expanded plans to build flex fuel vehicles (FFV) capable of utilizing the fuel. While E85 represents a small percentage of the motor fuels market today, interest in and use of the fuel is growing. Indeed, 2005 may very well be remembered as the year ethanol went from niche to nation. Not simply because of the RFS requirements, but because of the growing percentage of the marketplace ethanol maintains. Currently, 94 plants are processing more than 1.5 billion bushels of grain into 4.2 billion gallons of ethanol. An additional 30 plants are in various stages of construction, poised to add well over 1.5 billion gallons of capacity in the next 12-18 months. And still more announcements of plans to build ethanol plants fill newspapers across the country. The estimated 4 billion gallons of ethanol used in 2005 represents only about 3 percent of the gasoline market. But more telling is the fact that ethanol is blended into more than 30 percent of the nation’s gasoline. With new plants being built outside the traditional Corn Belt, and new markets opening with the removal of MTBE, ethanol’s place in the motor fuels market is secure and will only continue to grow. As we look toward 2006, implementing a simple, workable RFS for both ethanol producers and gasoline refiners will be the top priority. Passing the legislation was the first step. Implementing the program in a manner consistent with Congressional intent and workable for all parties involved is equally as critical. In addition, efforts to expand the use of E85 through federal legislation requiring the manufacture of FFVs and continued Congressional attention to renewable energy will help keep the benefits of ethanol and other renewable fuels front and center in the debate over America’s energy future. Ethanol producers are also doing their part to ensure the industry remains vital and vibrant. Technological advances are improving refinery efficiency, developing new sources of energy, and expanding the feedstocks for ethanol production to crops like corn stover, wheat straw and switchgrass. With global demand for oil increasing and world supplies shrinking, renewable fuels are beginning to play a much more prominent role in world energy discussions. Countries around the world, in an effort to capitalize on ethanol’s rural economic, environmental and energy security benefits, are looking to Brazil and the U.S. as examples of what targeted and strategic investments in renewable fuels are capable of achieving. The ethanol industry is unrecognizable from the niche industry that existed five years ago. And five years from now, it will be unrecognizable from the industry we see today. Even the most conservative estimates acknowledge that the ethanol industry is entirely capable of not only meeting, but exceeding the requirements set by the RFS through 2012. Ethanol’s unique combination of economic and environmental characteristics positions it well to be major part of America’s motor fuel future.