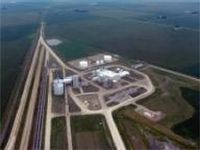 Des Moines, Iowa [RenewableEnergyAccess.com] New construction on a $200 million commercial scale bio-refinery, designed to use advanced corn fractionation and lignocellulosic conversion technologies to produce ethanol from corn fiber and corn stover, is slated to begin early next year. Once completed in 2009, Voyager Ethanol in Emmetsburg, Iowa, will reportedly turn out 11 percent more ethanol from one bushel of corn — and 27 percent more ethanol from an acre of corn — while using 83 percent less energy than a traditional corn-to-ethanol plant.

Known as Project LIBERTY, which stands for Launch of an Integrated Bio-refinery with Eco-sustainable and Renewable Technologies in Y2009, the plant’s current 50 million gallon per year conventional corn dry mill infrastructure will be converted into a 125 million gallon per year cellulose-to-ethanol production plant. Work on the new facility is slated to begin in February 2007 with a commercial production timeline set approximately 30 months later. “Thanks to our commitment to renewable fuels, we are changing Iowa’s economic landscape. This new facility in Emmetsburg is a solid investment in emerging renewable fuels technology. By finding new ways to produce ethanol, we are providing new jobs to Iowans and cementing our position as the leader in renewable energy,” said Governor Vilsack at a recent press conference in Des Moines. Project LIBERTY is being built by Broin Companies, a dry mill ethanol producer, which has applied for matching grant funds through the U.S. Department of Energy (DOE) to assist with the $200 million expansion. “The need to commercialize cellulosic ethanol is apparent as the United States continues to move away from its dependency on oil. We have been working very hard at developing technologies and advancements the past several years to position Broin as a leader in this area, and the project in Emmetsburg is a major step toward reaching that goal,” said Jeff Broin, CEO of Broin Companies. Technology efforts for Project LIBERTY began several years ago and escalated when Broin and the DOE jointly funded a five-year research initiative to develop and improve dry mill fractionation with the assistance of the National Renewable Energy Laboratory (NREL) and South Dakota State University. The project provided for the commercialization of Broin’s fractionation technology (BFrac). The results of BFrac, according to Broin, produce higher ethanol yields as well as creates additional value-added products and streams — including the intended use of fiber in the production of cellulose to ethanol. “I want to congratulate the Broin Companies and the people of Emmetsburg for this exciting investment in Iowa’s renewable energy future,” said Governor-Elect Culver. “This plant represents exactly the kind of advancement in the alternative fuels industry that I will make the focus of our economic development efforts. This facility will mean new jobs and millions of dollars for Iowa’s economy. In my administration, as the renewable energy economy continues to grow rapidly, we will continue the progress we have made in attracting firms like the Broin Companies to Iowa to create more opportunities.” Voyager Ethanol began operations in March of 2005. In addition to producing an expected 125 million gallons per year of ethanol after the expansion, the Voyager facility will create 100,000 tons of Dakota Gold Corn Germ Dehydrated and 120,000 tons of Dakota Gold HP produced annually as animal feed co-products.