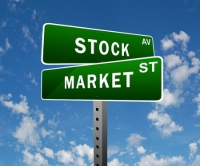 In the past, I generally only wrote about my annual list of ten clean energy stocks on a quarterly basis, but when I wrote last month to apolgize for inadvertently slipping in an extra stock, and in the process wrote a few notes on a couple of the stocks with news, a couple readers wrote to say they liked the more frequent updates. So let it be written, so let it be done.

Leave a comment if you think it’s something I should continue doing, or if you think my limited writing time is more valuably spent talking about stocks you have not already heard about.

For details on the composition of the portfolio and hedged portfolio, see the original article: 10 [sic] Clean Energy Stocks for 2012.  Stock-by-stock performance and dividends are shown in the chart below.  Note that the performance of foreign-traded stocks mrked with * is calculated based on the prices in their home markets converted to dollars at the prevailing rate at the time. 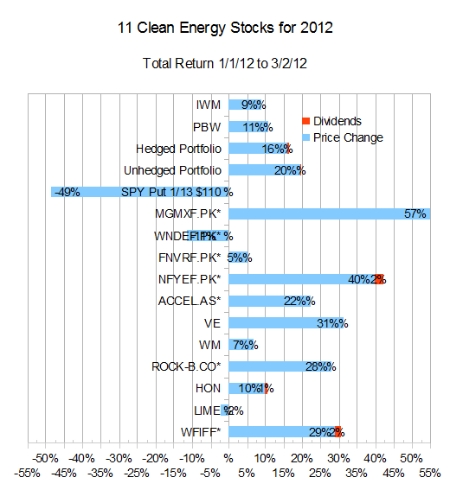 The three European stocks (Rockwool  [ROCK-B.CO] up 28%, Veolia [VE] up 31%, and Accell [ACCEL.AS] up 22%) have done well this year, as investors worst fears of the outcome from the Greek debt crisis begin to fade.  Veolia climbed 15% over the last two days based on its announcement that the company is in talks to sell its mass transit unit.

The top performer has been Alterra Power [MGMXF.PK/AXY.TO.]  I think the 57% gain so far this year is partly based on the fact that the company had been so beaten down last year, and the announcement that the group of Icelandic pension funds that owned 25% of its HS Orka geothermal plant had increased their stake to 33.4%.  This is good for Alterra in two ways: the cash can be used for investments in other renewable energy projects, and the greater local ownership of the Icelandic power plant helps to blunt the criticisms of Icelandic nationalists who who have been highly critical of foreign ownership of this power plant, which meets 9% of Iceland’s electricity needs and 10% of its heating needs.

The other star performer has been transit bus manufacturer New Flyer (NFYEF.PK/NFI.TO).  I believe the stock’s rise has been mostly a rebound from excessively depressed levels at the start of the year.  Even at the current $7.89 a share, I think this high-yielding stock remains an excellent value.  The story at Waterfurnace (WFIFF.PK/WFI.TO) is similar, with the stock rebounding from severely undervalued levels at the start of the year on little news of note.

Drifting in the Western Wind

The worst performer has been Western Wind Energy (WNDEF.PK/WND.V.)  This stock has been drifting slowly downward on a lack of news after rejecting potential buyout at the end of last year.  Since the company has completed its Windstar and Kingman wind farms, the value of the company has risen appreciably since I wrote about it in late 2011, so the price decline represents an opportunity to pick up a deeply undervalued renewable energy power producer.  I have a limit order in to buy a little more at slightly below the current price, despite my fairly large existing position in the stock.

It’s been a good year so far for my picks, much like the start of my last banner year, 2009.  As I wrote when I introduced this list:

“I’m optimistic about 2012.  Unless we see a total economic meltdown…I expect strong appreciation of this portfolio of undervalued clean energy stocks in 2012.”