Some investors buy clean energy stocks because it’s the right thing to do, others because we know that the diminishing availability and increasing environmental impacts of traditional fuels will eventually force society to adopt more sustainable solutions. Cartoonist Scott Adams says we’re all wrong, and we should invest in companies we hate.

Although Adams’ column is meant to amuse, rather than serve as investment advice, it’s funny because he touches on two very important truths about investing.

Both those truths are on display as I look back on the first half performance of my annual list of ten clean energy stocks.  After three years in a row of outperforming my clean energy benchmark, my winning streak seems likely to end in 2011.  So far this year, my benchmark PowerShares Clean Energy (PBW) ETF is down 13.4% for the year, while my ten picks are down considerably more, at 25.2%.  Meanwhile, the broad market was up 5.2%, as reflected in the Russell 2000 index.

The pattern of losses, while in part due to bad luck, also comes from ignoring principle #2: I included too many stocks I liked, despite the fact that they were fairly expensive on conventional measures. 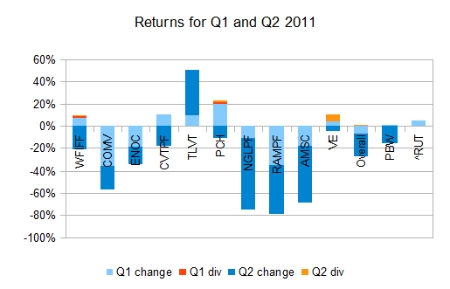 The top performing stock in the list is IT solutions provider Telvent Git S.A. (TLVT), which I included in the list because of its smart grid and smart transportation solutions.  Energy management leader Schneider Electric (SBGSF.PK) has made an offer of $40 per share for Telvent which looks likely to go through.  For the second half of 2011, I will be replacing Telvent in the list with bus manufacturer New Flyer (NFI-UN.TO/NFYIF.PK) which is currently quite cheap because of investor uncertainty surrounding a change in the company’s structure.  Although I thought New Flyer was too expensive (at $11.34) to include in this list at the end of last year, I now think it’s a steal at $8.  Hence, for every share of Telvent in my model portfolio, I will replace each share of Telvent with 4.84 shares of New Flyer.  (4.96 = $38.90/$8.03, the ratio of the closing prices of New Flyer and Telvent on 6/30/11.)

Two companies that are down for the year, but roughly in line with the sector as a whole are Geothermal Heat Pump (GHPs) stock Waterfurance Renewable Energy (WFI.TO/WFIFF.PK), and Electric Transmission and efficient vehicle conglomerate CVTech Group (CVT.TO/CVTPF.PK).  CVTech seems to be down on lower first quarter revenues (despite higher profits.)  The revenue drop seems to be mostly weather-related, and the company’s pipeline of work is healthy, with $14 million in new contracts being announced in June.

Waterfurnace stock is down from the start of the year because of narrowing margins despite increased sales in 2010.  Commodity prices have driven up component costs and the competitive marketplace for GHPs did not give Waterfurnace the market power to pass those costs on to customers.  Sales were down in Canada last year because of the end of that country’s EcoEnergy Retrofit program.  That program will be re-instated this year, but so far it has only been renewed for one year, so the boost to sales will not be long term unless it is extended again.  The U.S. GHP tax credit is currently slated to expire at the end of 2016, but given the current deficit reduction talks in Washington, this could conceivably be terminated prematurely.

I think all of these seem worth holding on to, and I’ve been buying more of CVTech and Waterfurnace at the recent lower prices.

The two demand response companies, Comverge (COMV) and EnerNOC (ENOC) have been a big disappointment.  I’ve been trying to get a handle on why the stocks are down so much this year by doing a series of interviews with management of companies in the broader Energy Management industry.  So far I’ve written articles on World Energy Solutions (XWES) and EnerNOC.  When I interviewed EnerNOC CEO Tim Healy, I asked him what he thought.  He said, “I think people are overlooking the story for the next couple quarters,” and that he has tremendous confidence about EnerNOC’s medium to long term.

I’ll be talking with Comverge CEO Blake Young next week, and I intend to ask him the same question, but I think Healy got at the real problem: When I added these stocks to the list last December, I (like most investors at the time) was paying too much attention to the story of Demand Response, and not enough attention to the next few quarters.  The pendulum of investor attention tends to swing back and forth between the long term story and short term profitability, and the best time to buy a great story stock is when the company is being valued on current profitability.  So now is probably a good time to buy these two, if you do not already own them.

For my two geothermal picks, the first quarter had bad news for Ram Power (RPG.TO, RAMPF.PK), and Q2 held bad news for Nevada Geothermal Power (NGLPF.OB, NGP.V).  The former was poor drilling results, and the second was worse than expected resource productivity at Nevada Geothermal’s flagship Blue Mountain property.  Although geothermal drilling is extremely risky, this was far more than the usual quota of significant bad news for the stock, and both have sold off sharply.  Both events significantly impacted the intrinsic value of the companies, but I feel that this has been more than reflected in each stock’s share price, as I discussed in May.

American Superconductor Corporation (AMSC) also had bad news in Q1, when they reported problems with their main customer Sinovel Wind Group (601558.SS).  I discussed this situation in detail in a series of three articles, the first exploring what Sinovel’s action might mean, the second looking into Sinovel’s motivations and speculating as to Sinovel’s future actions, and the third an attempt to value AMSC given all the uncertainty in the midst of a delayed annual report filing.  At the current price of around $9 AMSC seems cheap, but while I have been tempted at several stages in this process to speculate on the stock, I decided in the end to stay out.  One thing that seems fairly certain was that AMSC management was not being completely frank about their relationship with Sinovel over the last half of 2010 and 2011 in that they were not discussing Sinovel’s unwillingness to pay for product in a timely fashion.  Perhaps they were deluding themselves as well as investors, but in any case I’ve decided to stay away from a stock where I know I can’t trust what management is telling me.

At $9, AMSC is so cheap right now that I’m going to leave it in my model portfolio, but I hope any readers who bought it because they were following my annual ten picks sold it around $12, the price at which I suggested getting out in May.

It’s been a miserable six months for Clean Energy in general, and my picks in particular. I don’t see many signs of markets reversing the trend yet.  On the other hand, prices of many stocks are starting to look like good values, so patient value investors should seriously consider moving some money into the sector.  These ten stocks (minus American Superconductor) might be a good place to start.  Another would be my recent overlapping list of ten clean energy stocks I’m buying now.

Sierra Club/Green Alpha Portfolio manager Garvin Jabush thinks Wall Street has irrationally turned its back on solar, so investors might also consider solar, although many companies will find their earnings undermined by the current PV module supply glut.  The question is, is Wall Street getting carried away (on the downside) with the PV supply glut and falling subsidies story? And have prices already fallen far enough to discount all the future bad news?

Perhaps the group of investors who should be putting the most money into clean energy right now should be the growing chorus of high-profile Republicans who deny that climate change is even happening.  After all, didn’t Scott Adams say that we should invest in what we hate?

DISCLAIMER: Past performance is not a guarantee or a reliable indicator of future results.  This article contains the current opinions of the author and such opinions are subject to change without notice.  This article has been distributed for informational purposes only. Forecasts, estimates, and certain information contained herein should not be considered as investment advice or a recommendation of any particular security, strategy or investment product.