Few investors have good memories of 2008, but when it comes to the performance of my annual model portfolio of ten clean energy stocks, I’m finding the resemblance to 2008 remarkably striking.

The good part of that memory is that my picks are once again out-performing my clean energy benchmark, the PowerShares Clean Energy ETF (PBW).  The bad news is that “out-performance” means down 44 percent for the portfolio, compared to down 48 percent for PBW: a Pyrrhic victory.  Over the same period, the broad market Russell 2000 index was down 22 percent.  For 2008, the results were down 55 percent for the whole portfolio, compared to down 67 percent for PBW and down 42 percent for the S&P 500.  (I have used the Russell 2000 as my broad market benchmark for the last few years because I think it is a better match for the types of stocks I pick for the portfolio.) 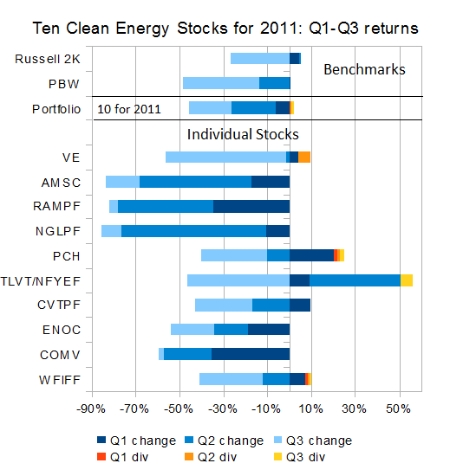 This year has been a rough one for my ten clean energy stocks for 2011.  Not only has the clean energy sector greatly underperformed the broad market, but three of my picks have revealed bad news which sent their shares tumbling.  Ram Power (RPG.TO, RAMPF.PK) revealed drilling cost overruns at their flagship geothermal project in Nicaragua, while Nevada Geothermal Power (NGLPF.OB, NGP.V) revealed problems at Nevada Geothermal’s flagship Blue Mountain property.

If that was not bad enough, American Superconductor Corporation (AMSC) keeps going from bad news to worse.  In Q1, they reported problems with their main customer Sinovel Wind Group (601558.SS).  I discussed this situation in detail in a series of three articles, the first exploring what Sinovel’s action might mean, the second looking into Sinovel’s motivations and speculating as to Sinovel’s future actions, and the third an attempt to value AMSC given all the uncertainty in the midst of a delayed annual report filing.  Most recently, we learned that AMSC was the victim of cut-price industrial espionage and that the company is suing Sinovel.  All this is happening while the company’s eponymous high temperature superconductor business seems to be on the cusp of rapid growth, but I have to wonder if the ongoing fallout from the Sinovel saga won’t overwhelm this much smaller part of AMSC’s business.

Also since my last update, one of the companies I had expected to add some stability to a portfolio with several risky stocks, Veolia Environnement SA (VE) gave us its own nasty surprise with lower guidance related to restructuring because of declining trash volumes, plans to downsize, and an accounting fraud in its U.S. division.

One bit of good news in Q2 was that energy management leader Schneider Electric (SBGSF.PK) made a buyout offer for IT solutions provider Telvent Git S.A. (TLVT).  Since this list is not meant to be an actively managed portfolio, I decided to substitute bus manufacturer New Flyer (NFI.TO/NFYEF.PK) for Telvent during my last update.  So far, that has turned out to be a bad move, since New Flyer fell with other clean energy stocks in Q3, while Telvent stayed flat at a few cents below the buyout price.

These annual model portfolios are not meant to be actively traded; I intend them for the use of investors who prefer to fire and forget.  That said, many readers, like me, prefer a more active approach, so what follows is my current trading stance on each of the stocks in the portfolio.

The two demand response stocks Comverge (COMV), and EnerNOC (ENOC), as well as the two geothermal stocks Ram Power (RPG.TO, RAMPF.PK) and Nevada Geothermal Power (NGLPF.OB, NGP.V) have all fallen to levels where they are trading considerably below their book value.  Any and all of these could be buyout targets at current prices.  Since the market decline began in late July, however, I have turned my attention to buying possible income opportunities on the cheap rather than distressed companies such as most of these.  While I have not sold my stake in any of these stocks, I am not looking to buy anymore, either.

I have not looked closely at Potlatch Corp. (PCH) recently.  The company was initially included in the portfolio as an income-style investment, but given the large decline in other stocks, I have seen plenty of other income style investments at similar yields recently, so I have not been tempted to revisit this one.

American Superconductor Corporation (AMSC) is a similar case although I have a much harder time determining what the company’s value actually is.  As such, in July I bought some $10 calls on the stock expiring in January 2013, a position which limits my downside but gives me a possible payoff if all the bad news is replaced by some good.  Since the stock has fallen considerably since the lawsuit news, I would be more likely to buy calls with a strike price of $7.50 than $10 if I were again in a speculative mood.

I currently am heavily overweight in Waterfurance Renewable Energy (WFI.TO/WFIFF.PK) and New Flyer (NFI.TO/NFYEF.PK).  I recently added significantly to my position in Waterfurnace at $15.50 and wrote about it here.  With the stock now trading around $17.60, I think it’s worth buying if you don’t yet have any, but investors who already have decent sized positions should probably hold off and see if the ongoing market turbulence creates another such opportunity below $16.

I last added to my New Flyer position at $0.61 (re-organization-adjusted).  Since it’s still trading around there and pays a very healthy dividend, I’d be filling up a bus with this stock if I had not already.  New Flyer recently announced that their planned 10 for 1 share consolidation has been approved by shareholders, so the stock should be trading in the low $6 range after October 5, rather than the low 60 cent range.

Veolia Environnement SA (VE) looks attractive below $15 because of the large dividend yield and relatively stable waste management and environmental services business.  Recent problems seem well-reflected in the price of the stock, and I have orders in to buy more on any share declines.  I bought at $13.38 on Tuesday.

CVTech Group’s (CVT.TO/CVTPF.PK) electric power maintenance and construction business continues to win contracts, but the stock has fallen because of a big drop in profits and revenues last quarter, which management ascribes to the current climate of financial uncertainty.  I think investor fears are overblown since the company still has a large backlog, and the company’s bread and butter business of power line maintenance cannot be delayed forever.  CVTech is currently trading under book value at $0.90 and a yield of over two percent which is well covered by both earnings and cash flow (the payout ratio is only 14 percent).  I think this stock is vastly under-appreciated because of its small size and low trading volumes, and management seems to agree, since they initiated a normal course tender offer to buy back stock in August.  This is a non-distressed company trading at distressed prices.

Now is an excellent time to be acquiring stakes in dividend paying businesses with depressed stock prices due to the current financial uncertainty.  I think the crisis is far from over, however, so continue to keep some powder dry as more opportunities continue to emerge.

DISCLAIMER: Past performance is not a guarantee or a reliable indicator of future results.  This article contains the current opinions of the author and such opinions are subject to change without notice.  This article has been distributed for informational purposes only. Forecasts, estimates, and certain information contained herein should not be considered as investment advice or a recommendation of any particular security, strategy or investment product.