Coal is having a hard time lately. U.S. power plants are switching to natural gas, environmental restrictions are kicking in, and the industry is being derided as the world’s No. 1 climate criminal. Prices have crashed, sure, but for a real sense of coal’s diminishing prospects, check out what’s happening in the bond market.

Bonds are where coal companies turn to raise money for such things as new mines and environmental cleanups. But investors are increasingly reluctant to lend to them. Coal bond prices tumbled 17 percent in the second quarter, according to an analysis by Bloomberg Intelligence. It’s the fourth consecutive quarter of price declines and the worst performance of any industry group by a long shot.

Bonds fluctuate less than stocks, because the payoff is fixed and pretty much guaranteed as long as the borrower remains solvent. A 17 percent decline is huge, and it happened at a time when other energy bonds — oil and gas — were rising. Three of America’s biggest coal producers had the worst-performing bonds for the quarter:

Coal powered the industrial revolution and helped lift much of humanity out of poverty, but its glory days have reached an end. Here are four of the biggest pressures facing the industry:

About 17 percent of U.S. coal-fired power generation will disappear over the next few years, according to an analysis by Bloomberg New Energy Finance (BNEF). Obstacles include age, the abundance of cheap natural gas, and new EPA rules to cut pollution. Here’s a great visual breakdown of what’s happening to U.S. coal power.

The map shows coal plants in 2010 that may be headed for retirement. Blue circles represent plants that will be shuttered by 2020, while yellow will convert to gas, and red have undetermined futures. Big coal won a small victory over the EPA’s new mercury restrictions at the Supreme Court in June, but it’s most likely a temporary reprieve.

2. Even China Is Approaching Peak Coal

The biggest power investments are now happening in renewable energy, but fossil fuels will be with us for decades to come. The global burning of coal won’t peak on a global scale until around 2025, according to BNEF. But that doesn’t indicate a thriving industry. Even China, the world’s biggest consumer of coal, wants to be rid of it.

While China’s electricity demand will soar in the coming decades, its coal use will remain relatively flat, peaking by 2030 and then declining, according to BNEF. The pollution is too thick and the alternatives too cheap for coal to flourish. The chart below shows China’s ever-falling price of wind power (blue) and solar (yellow) vs. the rising cost of coal (dark gray) and natural gas (light gray) over the next 25 years.

Wind and Solar Will Win the Price War 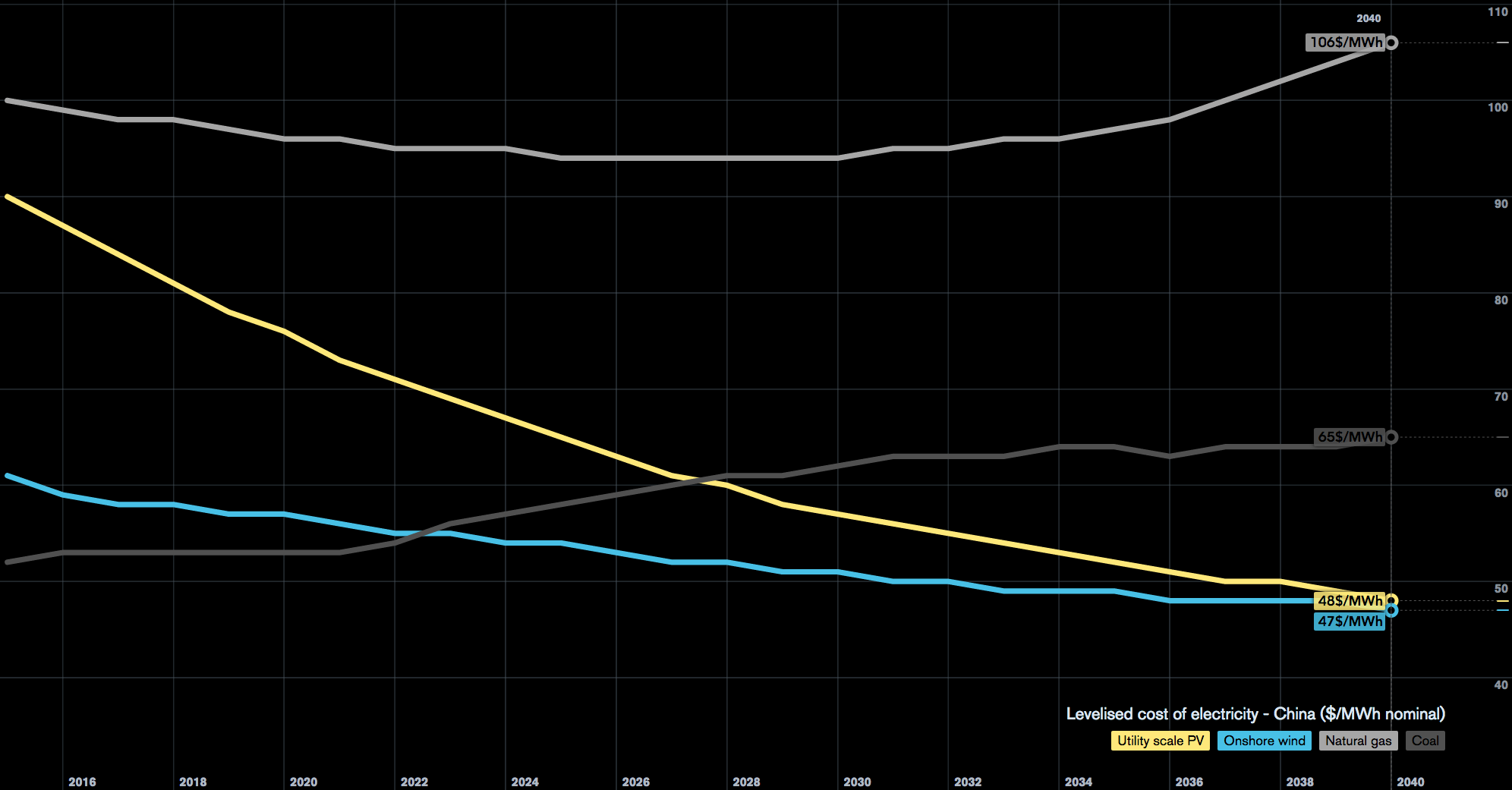 The declining prices of bonds is a huge problem for U.S. coal companies. When bond prices fall, the cost of borrowing money goes up. And coal needs more money.

Coal companies are allowed to avoid costly insurance premiums by showing they have the capital to clean up after themselves. It’s called self-bonding. This year the federal government has started taking a closer look at whether the struggling coal companies still qualify.

In May, the Wyoming Department of Environmental Quality told Alpha Natural Resources it no longer qualifies for self-bonding in the state, and the company has until Aug. 24 to post collateral or cash against $411 million of reclamation liabilities. The department last week confirmed that Peabody, the largest U.S. coal producer, can continue to self-bond.

Coal is an industry in terminal decline, and financial markets are reflecting this new reality. Drastic new energy policies are still needed to avoid catastrophic climate change, according to nearly every credible analysis. But even setting aside the environmental and health issues, renewables are on a trajectory to outcompete fossil fuels, starting with coal. Between now and 2040, two-thirds of the money spent on adding new electricity capacity worldwide will be spent on renewables, according to BNEF. The table below forecasts the proportion of renewable electricity in select countries by 2040.

In the past year, global stock prices for coal companies are down almost 50 percent, but it’s in the bond market that coal is really getting hammered. The focus of energy finance has shifted from coal to renewables, and it’s not likely to turn back.