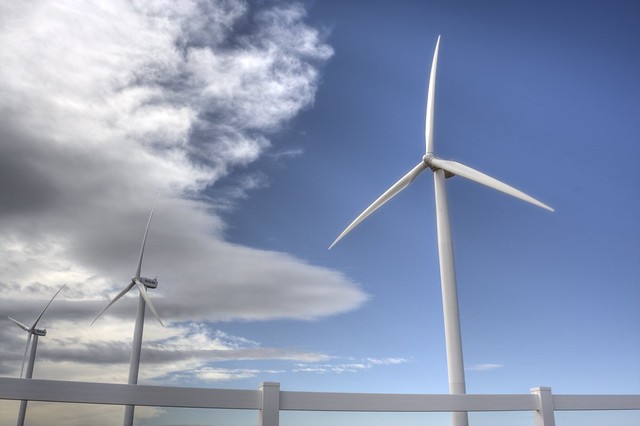 People have caught the wind to propel their boats for many thousands of years. I’m skipping that part of wind power history and jumping forward to the use of wind for mechanical and electrical purposes. In particular, I’m looking for the most part at the history of wind turbines.

1st century AD: For the first time in known history, a wind-driven wheel is used to power a machine. A Greek engineer, Heron of Alexandria, creates this windwheel.

By 7th to 9th century: Windwheels are used for practical purposes in the Sistan region of Iran, near Afghanistan. The Panemone windmills are used to grind corn, grind flour, and pump water.

By 1000 AD: Windmills are used for pumping seawater to make salt in China and Sicily.

1887: The first known wind turbine used to produce electricity is built in Scotland. The wind turbine is created by Prof James Blyth of Anderson’s College, Glasgow (now known as Strathclyde University). “Blyth’s 10 m high, cloth-sailed wind turbine was installed in the garden of his holiday cottage at Marykirk in Kincardineshire and was used to charge accumulators developed by the Frenchman Camille Alphonse Faure, to power the lighting in the cottage, thus making it the first house in the world to have its electricity supplied by wind power. Blyth offered the surplus electricity to the people of Marykirk for lighting the main street, however, they turned down the offer as they thought electricity was ‘the work of the devil.’ “ 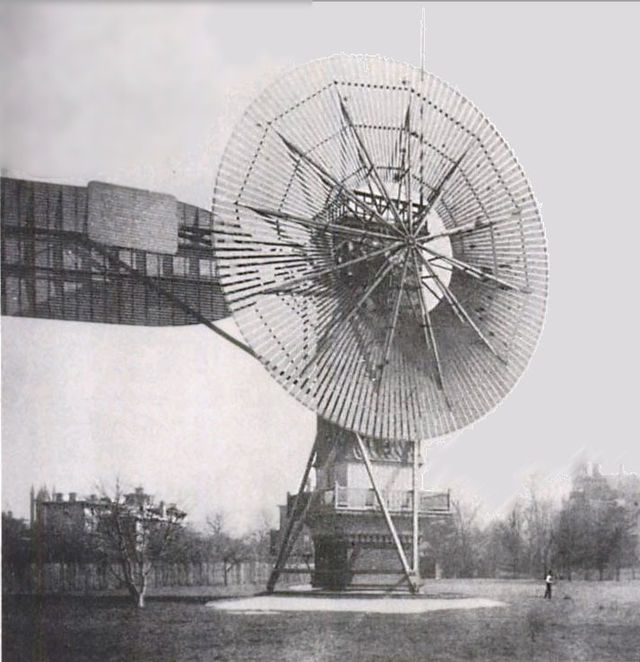 1888: The first known US wind turbine created for electricity production is built by inventor Charles Brush to provide electricity for his mansion in Ohio. (Pictured above.)

1891: A Danish scientist, Poul la Cour, develops an electricity-generating wind turbine and later figures out how to supply a steady stream of power from the wind turbine by use of a regulator, a Kratostate.

1895: Poul la Cour converts his windmill into a prototype electrical power plant. It is then used to provide electricity for lighting for the village of Askov.

By 1900: Approximately 2,500 windmills with a combined peak power capacity of 30 megawatts are being used across Denmark for mechanical purposes, such as grinding grains and pumping water.

1903: Poul la Cour starts the Society of Wind Electricians. He is also the first known person to discover that wind turbines with fewer blades that spin faster are more efficient than turbines with many blades spinning slowly.

1904: The Society of Wind Electricians holds its first course on wind electricity. (Class participants pictured above.)

By 1908: 72 electricity-generating wind power systems are running across Denmark. The windmills range from 5 kW to 25 kW in size.

1927: Joe Jacobs and Marcellus Jacobs open a “Jacobs Wind” factory in Minneapolis, Minnesota. They produce wind turbines for use on farms, since farms often don’t have access to the grid. The wind turbines are generally used to charge batteries and to power lights.

1931: A horizontal-axis wind turbine similar to the ones we use today is built in Yalta. The wind turbine has 100 kW of capacity, a 32-meter-high tower, and a 32% load factor (which is actually similar to what today’s wind turbines get).

1941: The first megawatt-size wind turbine is connected to a local electrical distribution grid. The 1.25-MW Smith-Putnam wind turbine is erected in Castletown, Vermont. It has blades 75 feet in length.

During World War II: Small wind turbines are used on German U-boats to recharge submarine batteries and save fuel.

1957: Jacobs Wind has now produced and sold approximately 30,000 wind turbines, including to customers in Africa and Antarctica.

1957: Johannes Juul, a former student of Poul la Cour, builds a horizontal-axis wind turbine with a diameter of 24 meters and 3 blades very similar in design to wind turbines still used today. The wind turbine has a capacity of 200 kW and it employs a new invention, emergency aerodynamic tip breaks, which is still used in wind turbines today.

1980: Wind turbine manufacturer Danregn Vindkraft is founded, spinning off from a Danish manufacturer of irrigation systems. It later becomes Bonus Energy and then Siemens Wind Power.

1980s: Enertech begins building 1.8 kW wind turbines that can connect to the grid.

1980s: Commercial wind turbine rotors get up to a diameter of 17 meters and a capacity of 75 kilowatts.

1981: A second wind farm goes up in the US. Total US installed wind power capacity is now approximately 10 megawatts, enough for approximately 8,575 homes.

1982: Four wind farms are online in the US, double the number from the year before, producing enough power for up to 13,500 homes.

1983: Danregn Vindkraft changes its name to Bonus Energy to better appeal to the US market it focused on.

1983: Eight wind farms are online in the US, double the number from the year before, producing enough power for up to 109,000 homes, over a dozen times more than two years prior.

1984: Fifteen wind farms are online in the US, almost double the year before, producing enough power for up to 146,000 homes.

1984: Enercon is founded. It eventually becomes Germany’s largest wind turbine manufacturer, and it remains in that position today.

1986: Vestas, which had previously focused on other types of machines (dating back to 1898), decides to focus 100% on the wind turbine market. It forms Vestas Wind Systems A/S and sells off its other business arms.

1987: A 3.2-megawatt wind turbine is developed by the NASA wind turbine program. It has “the first large-scale variable speed drive train and a sectioned, two-blade rotor,” which allows for easier transport.

1991: The first offshore wind farm in the world is constructed in southern Denmark. It includes 11 wind turbines manufactured by Bonus Energy, each with a capacity of 450 kW.

1992: The United States implements the Production Tax Credit (PTC) for wind power. The PTC incentives electricity production rather than simply incentivizing installation (which resulted in problems with performance and reliability). In the initial years, wind power producers get paid 1.5¢ per kWh for electricity they produce for the first 10 years of operation. The PTC is a key incentive, probably the most important incentive, driving wind power growth across the US in the coming years. Though, Congress lets it expire before reinstating it several times, leading to a boom-bust cycle and limiting its overall effect.

1994: Vestas rolls out OptiSlip with a new wind turbine. OptiSlip allows the wind turbine to supply a constant current of electricity to the electric grid.

1994: Gamesa Eólica, a subsidiary of Spain-based Gamesa Corporación Tecnológica (which was formed in 1976 to develop new technologies and apply them to emerging activities), is formed in order to manufacture wind turbines. The next year, it also starts developing wind power projects.

1995: Suzlon Energy is founded in India to manufacture, install, and operate wind turbines.

1999: Vestas launches a wind turbine with “OptiSpeed,” which makes it suitable for low-wind sites.

2000: An order for 1,800 Vestas wind turbines, the largest wind turbine order in the world, is made by Spain’s Gamesa.

2003: The UK’s first offshore wind farm opens in north Wales. It includes 30 wind turbines, each with a power capacity of 2 megawatts.

2004: Vestas and NEG Micon merge. Afterwards, Vestas commands 34% of the wind turbine market, far more than any other country. 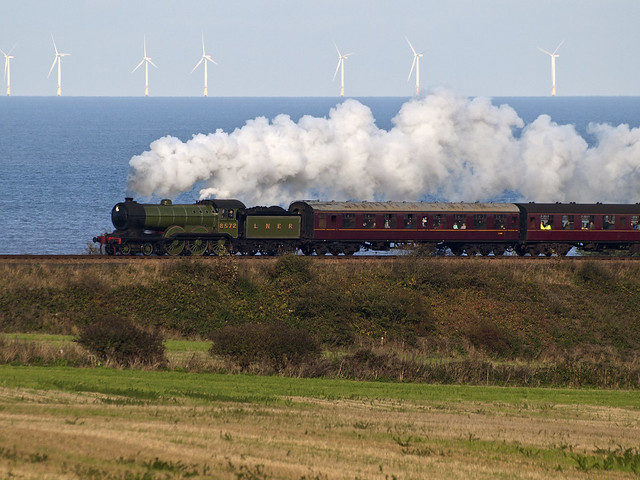 2007: The UK announces plans to install thousands of offshore wind turbines, enough to provide electricity for every home in Britain by 2020.

2008: Nearly 2000 wind farms are in operation across the UK, producing enough electricity for over 1.5 million British homes.

2009: The first large-capacity floating wind turbine in the world begins operating off the coast of Norway. It uses a Siemens wind turbine and is developed by Statoil. 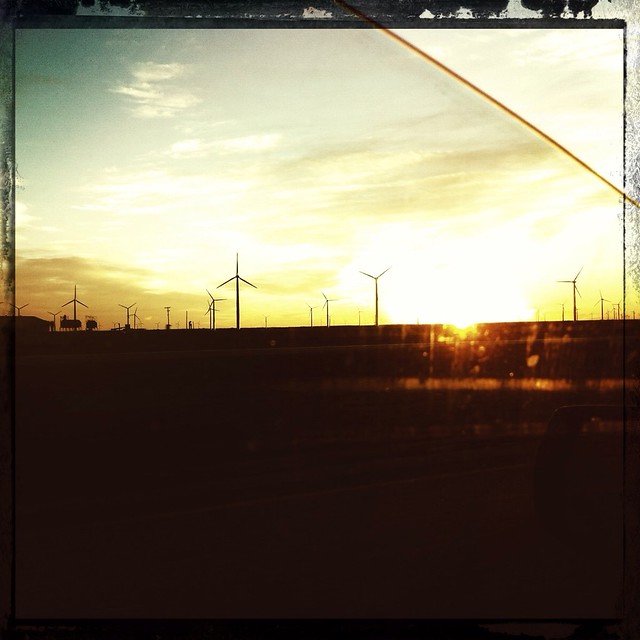 2009: An investment tax credit is implemented for manufacturers of wind power products. The 30% tax credit is part of the American Recovery and Reinvestment Act of 2009.

2009: New wind power projects in the US are eligible for a 30% grant from the US Treasury Department to help cover the cost of the projects and stimulate economic activity. The grant program is part of the American Recovery and Reinvestment Act of 2009, and is only available for projects placed in service by the end of 2010.

2009: New wind power projects in the US are eligible for a 30% Investment Tax Credit (ITC) in place of the PTC if they prefer. The grant program is part of the American Recovery and Reinvestment Act of 2009, and is only available for projects placed in service by the end of 2013.

2010: The US Department of the Interior signs the first lease for an offshore wind energy project, Cape Wind.

2012: The Alta Wind Energy Center in California becomes the largest wind farm in the world. It has a power capacity of 1,320 megawatts, with plans to increase that to 3,000 megawatts. It includes 440 wind turbines at the end of 2012.

2012: 815 wind farms are in operation in the US, with a total power capacity of about 60 gigawatts, enough to power up to 15 million US homes.

2012: Wind power becomes the #1 source of new power capacity in the US. 45,100 wind turbines are installed in the US this year, accounting for 42% of all new US power capacity.

2012: The US again becomes the world’s largest wind power market.

2012: Installed wind power capacity in China reaches 75 gigawatts, the most in the world for a single country.

2012: The UK has over 3 gigawatts of offshore wind power capacity installed, the most in the world and over three times more than Denmark, which comes in second.

2012: Vestas produces its 50,000th wind turbine, and its wind turbines installed around the world reach 50,000 megawatts of power capacity.

2013: The world’s first hybrid wind/current-powered turbine is installed off the coast of Japan.

2013: The London Array wind farm is completed in the UK. The London Array becomes the largest offshore wind farm in the world. It includes 175 wind turbines for a total capacity of 630 megawatts of power capacity, enough to cover the annual electricity consumption of 480,000 British homes.

2013: China again passes the US to become the world’s largest wind power market.

2013: Wind power produces more electricity than any other source in Spain for three months in a row, is now providing the country with approximately 25% of its electricity.

2013: The first offshore wind turbine in the US is launched.

Wind power has come a long way, but it still has a ton of room to grow. Its growth in the coming decades is projected to be much larger than it was up till now.