The World Resources Institute (WRI), a past Zayed Future Energy Prize finalist and a 2015 Zayed Future Energy Prize finalist, works in various ways to advance the adoption of clean energy and other climate change solutions. Some important initiatives it has been behind include the Greenhouse Gas (GHG) Protocol, Electricity Governance Initiative (EGI), and organizing one of the earliest corporate Power Purchase Agreement (PPA) for solar energy.

For example, the GHG Protocol it developed, which can be used to quantify the emissions impact of installing renewable energy, is used by ¾ of Fortune 500 companies, the EU ETS, and China’s National Development and Reform Commission.

It also launched the Electricity Governance Initiative (EGI), which enables stakeholders in nations with growing GHG emissions to increase public participation and work with governments and utilities to reduce emissions. The EGI Toolkit has been used in South Africa, helping it to adopt a more renewable-friendly energy plan targets a 50% increase of renewable energy. More than 30 civil society groups across the world have used the kit to analyze electricity planning processes and advocate policies.

WRI is especially respected for its data-driven approach to matters it tackles. The research and analytical tools are truly resources for the world, as it has positively influenced just about every corner of the globe. Just this past week, WRI released a report highlighting the fact that renewable energy and electric cars are now cost-competitive in the US. You can click that link to read my full article on the report, or here’s the full report. As a sampler, here are two charts from the report, one showing that renewable energy is now cost-competitive with conventional electricity options in the US, and the second showing that electric cars are often cheaper than popular gasoline-powered and hybrid cars: 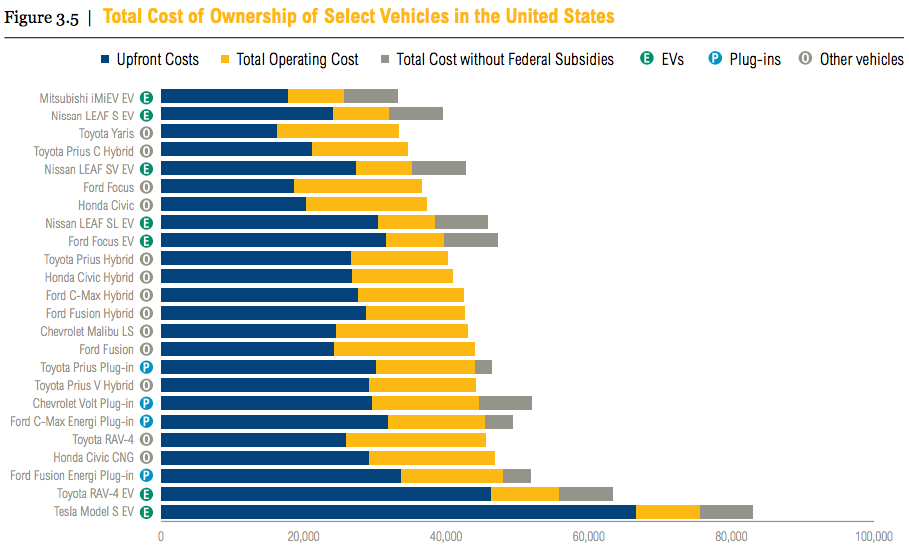 WRI is one of five finalists in the nonprofit category of the 2015 Zayed Future Energy Prize.

For more about the organization, check out the WRI website.