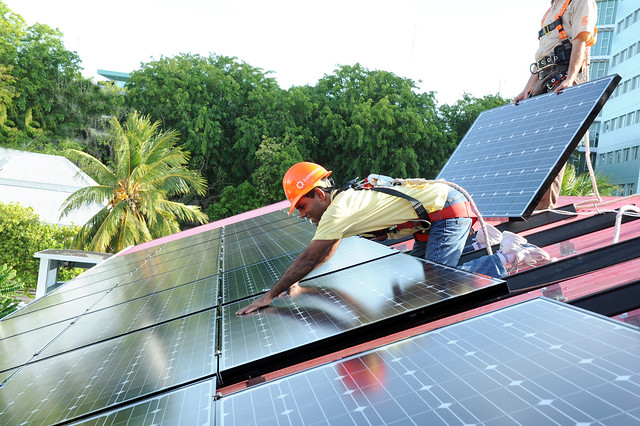 Solar power rocks. It really rocks. Polls often show that ~90% of people support solar energy, but I bet that few of them realize all of the that ways solar power is helpful. I probably don’t even know all the ways that it is helpful, but after covering the industry for about 5 years, below are some points that I think “everyone” should know.

1. Starting with the most obvious one, solar power is one of the most important solutions to our global warming crisis, as well as air and water pollution. In other words, it’s important for our health, life, and safety… as well as that of our children and grandchildren.

2. Solar power saves us money .  If you look at things from a consumer side, solar power is often cheaper than electricity from the grid. If you look at it from the grid or societal side, that may not seem to be true on the surface, but if you actually take into account the benefits noted above and below, everything I’ve seen trying to quantify the matter says that solar power does indeed save society money.

3. Solar power improves grid security.  On a centralized grid, if someone decided to take out a few power plants, some substations, and a transformer manufacturer, even the US would be in big trouble for well over a year . A natural disaster can also wreak havoc, as we’ve seen with Superstorm Sandy and the Fukushima crisis in recent years. A decentralized grid or many microgrids, built around widely distributed solar power systems, is much, much more secure.

4. Since solar power systems can be located right next to (or on top of) the places electricity is needed, expensive transmission infrastructure can be minimized.

5. Solar energy is, of course, almost limitless. As long as humans will be around, solar energy will be available.

6. Solar energy is a very reliable source of energy. We know the sun will rise every day. We also have a good sense of how much sunshine specific places will receive throughout the year, and when it will be sunny… aside from off-target weather forecasts, that is. (Note that climate is much easier to understand and predict than weather .)

7. Solar power is a great job creator . While a lot of the money that goes into fossil fuel electricity production goes to millionaires and billionaires who own fossil fuel resources, sunshine is free. The costs of solar power systems are largely in the labor it takes to make and install the systems, which means that solar power is a better job creator than electricity from coal, natural gas, or nuclear energy.

8. Solar power can make you energy independent. Forget fossil fuel price spikes or continual rises. Once you get a solar panel system, you can mostly or even entirely stop thinking about the volatility of fuel that comes from the earth rather than the sky.

9. Solar power often provides electricity right when we need it most, in the middle of the day. This is convenient, but it also brings up the value of solar power since those “peak power demand” times are when electricity is most limited.

11. Solar power also makes you more energy conscious, which may encourage you to save energy much more or may even encourage or enable you to buy an electric car!