Here’s one for the no-big-surprise file: A “clean” coal plant advocated by former Illinois Governor Rod Blagojevich has turned out to cost twice as much as the price at which it was approved.

The Blagojevich name is, of course, synonymous with boondoggle. But the no-big-surprise is not because “Bloggo” backed the project but because anybody ever believed a plant labeled “clean” coal would be anything EXCEPT a boondoggle.

According to Clean coal dream a costly nightmare; Five Chicago suburbs and dozens of other Midwest towns in power-plant deal now face the prospect of rising electricity bills, from the Chicago Tribune, a long list of local and state Illinois political leaders and regulators with the Illinois Municipal Electric Agency (IMEA) believed Peabody Energy when they promised to build a plant that would spew fewer toxins at a low, low price of $2 billion dollars.

The Prairie State Energy project is nearing its 2011 completion target and the price tag for its two 800-megawatt turbines is now over $4.4 billion and rising. Residents and leaders in the communities it will serve trepidatiously await the announcement of what could be a 30% increase in local utility bills. 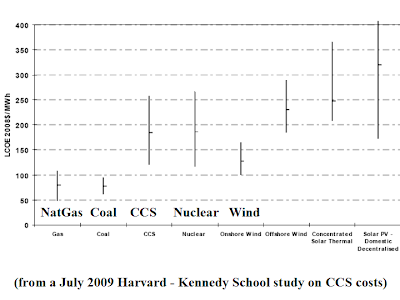 Because they stand to lose so much from GhG-capping legislation, officials from twenty Illinois communities who supported the building of Prairie State, or now have enormous financial interests in it, have been recruited by the coal industry as lobbyists in its fight against federal climate and energy legislation.

There is no such thing as ”clean” coal. There is, indeed, cleaner coal. Prairie State is real-life proof of it. Prohibitively expensive, Prairie State is an echo of the nearby federal FutureGen carbon capture and sequestration (CCS) experimental project that was abandoned when its projected costs ballooned and only subsequently reinvigorated as a federal welfare and jobs program.

Like the dream of “safe” nuclear power, the dream of “clean” coal is powerfully seductive. These are familiar sources of centralized electricity generation that offer seemingly ideal pathways to emissions-free power.

Don’t be seduced. Nuclear energy, like offshore oil drilling, is only “safe” until it isn’t. No matter what powerful vested interests like BP might promise, stuff happens. It happened to Exxon in Alaska, it happened to BP in the Gulf and it happened to the Russians at Chernobyl. And when it happens, it is devastating.

Don’t be seduced. “Clean” coal is only “cleaner” and there are enormous unanswered questions. The waste of existing ”cleaner” coal plants is an ecological decimation where it leaks or spills as in did at Christmas of 2008 in Tennessee. The sequestering of captured GhGs is of dubious safety and has already been shown to be potentially deadly.

Coal advocates have started a new campaign to get $1 billion in federal money for CCS and a federal commitment to long-term power purchases from FutureGen. Prairie State demonstrates the essence of the folly of investing in “clean” coal (and “safe” nuclear).

The cost of capturing, sequestering and/or disposing of the byproducts of coal combustion adds an estimated 75% or more to the cost of a new coal plant. By contrast, adding the current, still early-stage storage capabilities to New Energy systems likely increases the cost of electricity only about a third.

Why incur enormous increased cost burdens to build dirty, dangerous electricity generation infrastructure when, for the same investment if not less, it is possible to transition over time to reliance on the sun, the wind, the deep crust heat and the flowing waters of this good earth?

Footnote: When the Prairie State “clean” coal plant goes on-line, its GhG spew will be the equivalent of the southern Illinois rural and suburban region having added 2 million cars to its roads. 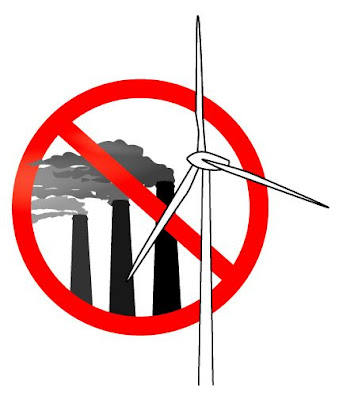 This post is based on Clean coal dream a costly nightmare; Five Chicago suburbs and dozens of other Midwest towns in power-plant deal now face the prospect of rising electricity bills by Michael Hawthorne (July 11, 2010, Chicago Tribune)

Solar and Geothermal Working Together in New York