That is why it is so interesting to see that, in response to the U.S. New Energy industries’ currently slowing momentum, wind is reaching out, forming alliances and pushing harder than ever for the federal policies that will matter.

Late in 2009, the American Wind Energy Association (AWEA) and the other New Energy industries reached out to the natural gas industry in an attempt to find common ground in the nation’s fight against coal dependence and the fight against greenhouse gas emissions (GhGs).

Now AWEA has joined the USW and its labor union and environmentalist partners in the Blue-Green Alliance to release “Winds of Change: A Manufacturing Blueprint for the Wind Industry. The Blueprint calls for an RES requiring U.S. utilities to obtain 25% of their power from New Energy sources by 2025. ::continue:: 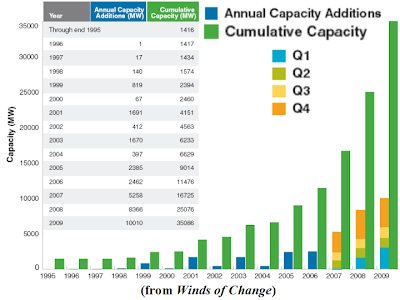 Wind, the ultimate American can-do energy industry, can and is doing what it has to. That it created a boom from 2004 to 2008, rose to a pinnacle of accomplishment and took over international leadership in wind energy production despite shoddy and inconsistent federal policy support means nothing now. That it went from 2,500 U.S. jobs in 2004 to 18,500 jobs in 2009 means nothing now. That it quadrupled its yearly capacity additions to 10 gigawatts in 2009 and finished the year with a world-leading 35+ gigawatts of cumulative U.S. capacity means nothing now.

What matters now is that the New Energies – and their new allies – be heard.

Political leaders in Washington, D.C., will – when they finish eulogizing Senator Byrd and tormenting Ms. Kagan – go to work on legislation in response to the April coal mine cave-in disaster that killed 29 miners and the even worse Gulf oil spill that killed 11 offshore oil platform workers and resulted in an environmental and economic atrocity for the region.

What matters now is that those political leaders get the message that fossil fuel-perpetrated devastations will only come to an end when the nation turns with all its might to New Energy.

What matters now is that those political leaders come to understand there is a choice in the kind of energy they subsidize and there are real and devastating consequences when they subsidize dirty and dangerous energies.

What matters now is that those political leaders also come to understand there is a huge opportunity for the nation in New Energy. It is an opportunity to staunch the flow of U.S. treasure to profoundly troubled places and people, to enhance the nation’s energy security, to invest in domestic sources of power generation in a way that will rehabilitate its economy and to get the nation on the world’s side in the fight against climate change and killer air pollution. 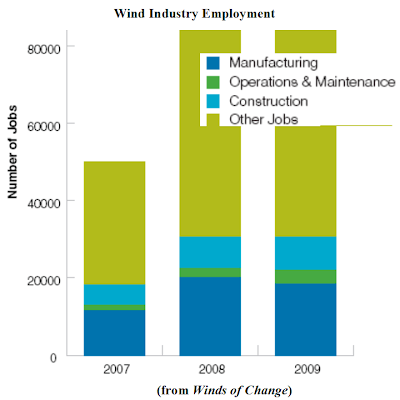 So the wind industry is speaking out. It is calling for federal policies that will give it a level playing field against its Old Energy competitors. Industries like nuclear energy, natural gas and coal have long had support in the form of federal subsidies, guarantees and incentives. The Old Energies, in fact, could not exist without such support. Wind and the other New Energies aske only that the rules be fair. Either take away their competitors’ advantages or give them long term policies like:

(1) A national Renewable Electricity Standard (RES) requiring U.S. utilities to obtain 25% of their power from New Energy sources by 2025,

(2) An extension of the Recovery Act’s 1603 convertible tax credit,

(3) A cap and price on greenhouse gas emissions (GhGs) with protections for vulnerable domestic industries,

(5) Expanded funding for the Advanced Energy Manufacturing Tax Credit to subsidize the building and renovation of manufacturing capacity,

(8) Funding for the Green Jobs Act to insure a trained job force, and

During the press conference held to announce the release of Winds Of Change, one of the speakers intended to say that not backing U.S. turbine makers with strong policies could result in the “cessation” of manufacturing activity and the wealth of economic benefits that come with it. He inadvertently said “secession” instead. But his malapropism was closer to the truth.

Turbine manufacturing will not cease. It will secede from the U.S. and move to other countries, countries like Turkey and China and India where they are backing their New Energy industries because they see what the fossil fuel addicts in U.S. political power centers refuse to see. They see that New Energy is the future and no matter how hard they try to stop it, it is coming. It is coming and it is bringing enormous opportunities for those countries smart enough to seize them. The time is now. NOW. 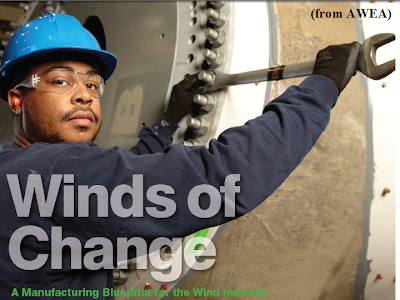