In the last year of his life, Senator Robert C. Byrd (D-WV) taught, not for the first time, the most important lesson of his long and storied public service.

Senator Byrd’s career demonstrates it is possible to – with integrity – change a publicly held position. In Byrd’s case there was in fact more integrity because he found the courage decades ago to reverse his racist position on segregation, denounce his affiliation with the Ku Klux Klan and become one of the stalwart defenders of civil rights.

In December 2009, Senator Byrd made an equally profound shift. After fighting his entire life on behalf of West Virginia’s coal industry, he concluded in December 2009 that he and his state must prepare to move on. In Coal Must Embrace the Future, Byrd wrote “Change is no stranger to the coal industry. Think of the huge changes which came with the onset of the Machine Age in the late 1800’s. Mechanization has increased coal production and revenues, but also has eliminated jobs, hurting the economies of coal communities. In 1979, there were 62,500 coal miners in the Mountain State. Today there are about 22,000… [C]hange is undeniably upon the coal industry again…”

Senator Byrd called for “…an open and honest dialogue about coal’s future in West Virginia…” After assuring his coal industry constituency that no “…effort to do away with the coal industry could ever succeed in Washington because there is no available alternative energy supply that could immediately supplant the use of coal for base load power generation in America…” he went on to warn them that to “…be part of any solution, one must first acknowledge a problem. To deny the mounting science of climate change is to stick our heads in the sand and say “deal me out.” West Virginia would be much smarter to stay at the table.”

Though Senator Byrd did not have The Impact of Coal on the West Virginia State Budget, from Downstream Strategies, to base his remarks on, he certainly could see what was then quite evident and what the report makes abundantly clear. West Virginia’s economically accessible coal supply is dwindling and the costs of being a coal supplier are going up. The report calculates that when all the costs are compared with the benefits, coal costs West Virginia more –$97.5 million more in 2009 – than it benefits the state. ::continue:: 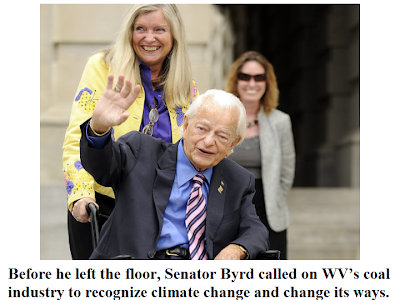 The benefits are obvious: Direct and indirect jobs in the tens of thousands and tax revenues in the hundreds of millions. The costs are less obvious and often go uncalculated. For instance, the total tax revenues related to the coal industry’s direct jobs in 2009 was ~$125.5 million but the state expenditures in support of those jobs was ~$125.9 million.

On the whole, it is true that the coal industry still generates a lot of money for West Virginia. But when things like the compromised health and work injuries that come from working in the industry and things like the wear and tear on the state’s roads and infrastructure are paid off, the state comes out a loser from hosting its coal industry.

In this season of graduations, it is worth noting that while so-called smart people continue to sneer that the New Energies can never be big enough to replace the Old and Dirty Energies, Senator Byrd showed that it is never too late to learn. Now that he has gone to his final graduation, perhaps it is time for his beloved state to pay close attention to his last strong advice about coal:

“The future of coal and indeed of our total energy picture,” Byrd, one of West Virginia’s greatest champions, wrote, “lies in change and innovation. In fact, the future of American industrial power and our economic ability to compete globally depends on our ability to advance energy technology…West Virginians can choose to anticipate change and adapt to it, or resist and be overrun by it. One thing is clear. The time has arrived for the people of the Mountain State to think long and hard about which course they want to choose.” 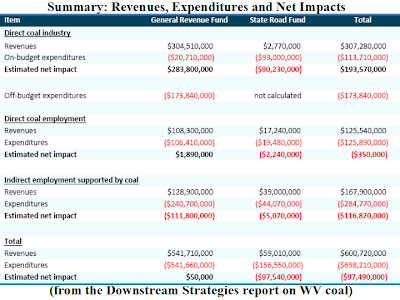