As pointed out in As Wind Soars, Will U.S. Fall Behind?, the difference is in the policies.

The Chinese central leadership has established clear and ambitious national New Energy goals. Smbitious entrepreneurs in the command and control economy have responded aggressively, achieving a pace of growth never seen before in the New Energy economy.

Free-marketeers in the U.S. have fought to keep the New Energies largely unsupported by strong, consistent long-term policies and goals at the federal level. As a result, the New Energy industries have suffered boom and bust as production and investment tax credits and their usefulness have waxed and waned.

Europe, meanwhile, has pioneered a third way. That their makers and doers are part of the first, thriving world of New Energy is a tribute as much to innovative policy as it is to aggressive entrepreneurship. EU policy – and what European Union policymakers are looking at going forward – is therefore worth taking note of. ::continue:: 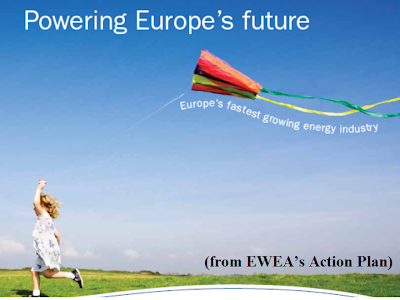 The first thing EU policymakers are looking at is economic trouble. The burden Greek travials have imposed on their more financially stable compatriots has been front-page fodder. The potential of such challenges spreading to the other members of the EU PIIGS (Portugal, Italy, Ireland, Greece, Spain) is widely feared.

The next thing European leaders are looking at is a rising need for new sources of power generation. It is estimated that new demand and old capacity will produce a need for 360 gigawatts of new electricity generating capacity by 2020. That’s half of all the generation the EU is now capable of.

Two more powerful forces are driving EU thinking: (1) The urgency of developing an alternative to dependence on Russian and Middle East natural gas and (2) the dark foreboding of global climate change. 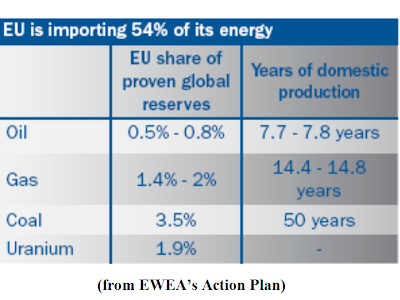 The EU’s Renewable Energy Directive, passed in 2009 and nicknamed the “triple 20,” calls for member nations to get an average of 20% of their power from New Energy sources – as well as reduce their greenhouse gas emissions (GhGs) 20% and improve efficiency by 20% – by 2020. Prgressive elements are clamoring for 30% goals.

Because there is still great unused potential in Europe’s wind resources – especially offshore – political and wind industry leaders have now begun pushing for more ambitious and far-reaching policies. By putting the right policies in place, they believe, wind development will be able to provide enough domestically-generated electricity to meet 3 times Europe’s expected 2020 demand and 7 times its expected 2030 demand. 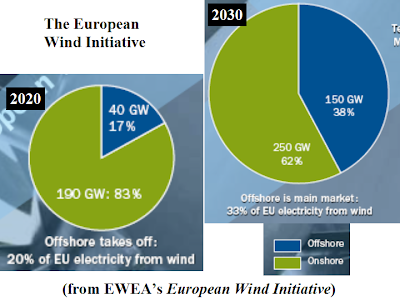 This post is based on Wind Energy: Action Plan for the new European Commission and Parliament and The European Wind Initiative; Wind power research and development of the next ten years (June 2010, European Wind Energy Association)