The International Energy Agency (IEA) is not known for utopian enthusiasm about a New Energy future. It has traditionally been interested in oil, natural gas and coal. So the IEA’s Technology Roadmap; Concentrating Solar Power is a genuine indication that the handwriting (about the coming New Energy economy) is on the wall and even the most traditionally fossil foolish see it.

The CSP Roadmap describes the kind of sun (direct normal irradiance, DNI) that is needed for the several technologies that use the sun’s heat to boil water, create steam and drive a turbine to generate electricity. CSP, used in solar power plants (SPPs), requires high clear skies and intense direct heat. It is ideally suited for the world’s arid, semi-arid and higher altitude deserts. Built in places with the right DNI, the IEA paper says, CSP can provide 11.3% of the world’s power by 2050. (Technology Roadmap; Solar photovoltaic energy, the IEA’s companion study on the more familiar rooftop solar PV technology that uses the sun’s light to make electricity, will be examined later this week.)

This is a conservative piece of research. Concentrating Solar Power Global Outlook, a 2009 paper from Greenpeace, the European Solar Thermal Electricity Association and SolarPACES (solar specialists within the IEA), found it was possible for CSP to provide 7% of world power by 2030 and a quarter of world power by mid-century. (See GREENPEACE LIKES SUN IN THE DESERT)

What is actually possible for CSP simply remains to be seen. So little CSP has been built and put to work that it is almost impossible – and yet deeply intriguing – to imagine what solar power plants might do as developers prove their competing technologies, build economies of scale and bring costs down to grid competitive levels. ::continue::

A recent Stanford University paper suggested a concerted effort in the U.S. could develop 49,000 CSP megawatts by 2030 from its 300 megawatts today. (See A Plan for a Sustainable Future…by 2030). Another study of the CSP potential in the Middle East and North Africa (MENA) hypothesized that nations there could get all or most of the needed 80-to-90 gigawatts of new generation from CSP by 2017. (See MIDEAST WASTING POTENTIAL AS BIG AS THE SUN…) The MENA study suggested CSP will achieve grid parity by 2025. 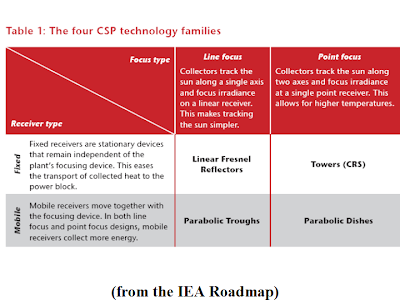 Many of the New Energies are still working hard to build the economies of scale that will drive their costs down to grid parity. But CSP is probably the only one that is getting a boost from the fossil fuels industries. At present, and at least (according to the IEA) through 2025, CSP’s best use is as a peak load smoothing generation source. CSP is most productive just when the most intense sun causes air conditioners to kick on and demand for electricity rises sharply. Developers are, therefore, being given the opportunity to build solar power plants adjacent to coal and natural gas facilities in “hybrid” configurations.

When demand peaks, the price of power is highest and CSP’s high cost is less out of line with the cost of adding extra fossil fuel generation. In addition, CSP-generated electricity can often ramp up quicker than extra coal or gas generation can be called on. Because fossil fuel plant builders can readily see the advantages CSP offers, they are spending for new hybrid capacity and the spending is helping CSP move toward the economies of scale it needs to bring its price down.

Finally, CSP technologies offer a crucial advantage over the PV solar technology that does not use the sun’s heat but converts the sun’s light to electricity. Electricity cannot be cost effectively and efficiently stored in large quantities for significant lengths of time. The heat captured by some CSP technologies (especially parabolic trough and power tower plants) can be stored in the form of heated and pressurized molten salts. The molten salts can be released after the sun has set or passed behind a cloud cover to generate more electricity. This storage potential could eventually allow CSP solar power plants to serve as a base-load power supply on a 24/7 basis.

Peak load is 10% of all electricity demand, intermediate load is 50% and base-load is the other 40%. For this reason, CSP has lots of room to grow by meeting the first 60% of demand. 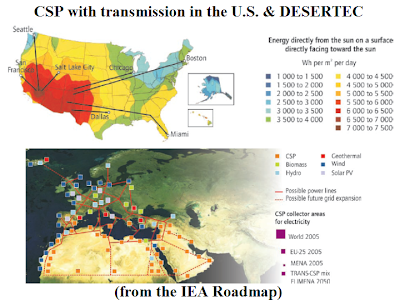 This post is based on Technology Roadmap; Concentrating Solar Power (11 May 2010, International Energy Agency)