If Alaska – with its long long nights so demanding of electricity for lights and its cold cold winters so crucially in need of heating – can transition to a New Energy economy, surely any state can. And Alaska Energy Pathway; Toward energy independence, from the Alaska Energy Authority, says yes, Alaska can. Can what? Can meet the state’s goal of getting half its electricity and heating from New Energy sources like hydropower, geothermal and wind by 2025.

Alaska is a uniquely diverse state with a contemporary metropolitan lifestyle in its Railbelt region from Homer to Fairbanks yet practically a developing world lifestyle in its rural outlying communities. Plans for either sector nevertheless settle on the same basic approach: (1) conservation and Energy Efficiency, (2) New Energy to reduce fossil fuel reliance, decrease greenhouse gas emissions (GhGs) and increase energy security, and (3) stable affordable utility rates.

The Alaska Energy Authority plan recommends that state leaders attend immediately to critical statewide supply/demand priority areas including (a) economic development, (b) climate change, (c) energy security, and (d) education and workforce development. It also recommends they add a 20% improvement in Energy Efficiency by 2020 to their target of getting half their power from New Energy sources by 2025. ::continue:: 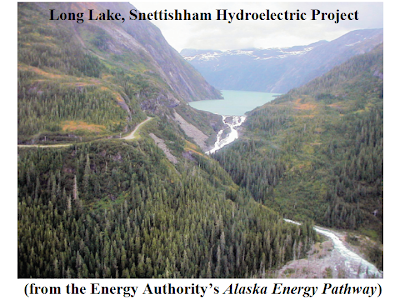 Electric generation with fossil fuels in the Railbelt region can, according to the Authority, be cut to 50% from the present 95%. The capital cost to make this transition would be $7.29 billion over 20 years. The problem is finding the funding to finance the transition. The debt capacity of Railbelt utilities is $1.0-to-$2.5 billion, some $4.5-to-$6.5 billion less than is needed. The 50% goal is, therefore not feasible without significant changes in the economy, changes in Alaskans’ Energy Efficiency habits and subsidy funding from state and/or federal programs.

Rural Alaska communities already get more than half their power from New Energy sources, especially hydropower. Electric generation from New Energy in the rural, non-Railbelt regions could, according to the Authority, be increased from 63% to 91% and the present 10% of space heating done with New Energy could be increased to 45%. This would cut greenhouse gas emissions (GhGs) from electricity generation 77% and from space heating 39%. The capital cost: $2.85 billion over 20 years. Once again, however, there is no clear way to fund the transition without outside assistance.

Alaska has begun a 3-part strategy to get the funding it needs. It is (1) cutting capital costs by reducing installed capacity goals, (2) upping the utilities’ debt capacity with a stronger economic base and better finance terms (loan guarantees, lower interest rates), and (3) pursuing state, federal and other grants and outside subsidies and investments.

The report concludes with a statement so brutally true and vitally important there is no point in trying to paraphrase it:

“Alternative energy is not an easy solution. It is not a cheap solution. But where practicable, it is a sustainable solution. The purpose of this report is to empower Alaskans at the community and regional levels to participate in finding the solutions that are right for themselves and their neighbors, and provide them with the tools to make smart choices about the direction their community heads. Energy is a larger issue than the cost of electricity or heating oil; it is intricately tied to Alaska’s various economies, and those economies are tied to the social health of a community and the state.”

Alaska may be the state that spawned the “drill, baby, drill” idiocy but whoever wrote that paragraph sees the future coming hard at every respiring creature on this good earth from the Alaska National Wildlife Refuge to the sand dunes of Saudia Arabia’s Empty Quarter. Whoever wrote that paragraph understands that what’s coming requires action and that action is not drilling. 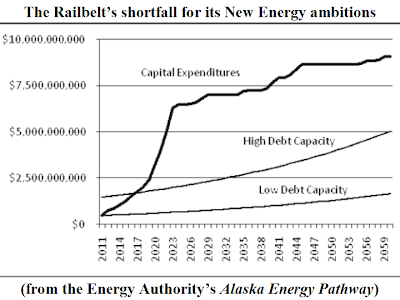 This post is based on No easy path: Report outlines costs, methods of renewable energy conversion (April 30, 2010, Fairbanks Daily News-Miner)