What it appears President Obama is trying to do by approving limited offshore oil drilling and limited loan guarantees for new nuclear power plants is recreate the approach California Governor Arnold Schwarzenegger used to get that state’s landmark Global Warming Solutions Act (AB 32) made law in 2006.

Part of the Governator’s success rested on his Nixon-to-China approach. Schwarzenegger had room to maneuver because he was a Republican standing up for the environment. Earlier moves by President Obama’s Environmental Protection Agency Director Lisa Jackson, like aggressive preparations to regulate U.S. greenhouse gas emissions (GhGs) if Congress does not act, were oriented toward the left end of the political spectrum. The President’s more recent Old Energy-friendly moves have taken his environmental policy back toward the center of the spectrum.

With endorsements of “safe” nuclear energy and “environmentally benign” offshore drilling, the President is obviously laying the groundwork for the bipartisan effort it will take to pass a climate and energy bill and get the U.S. into the world’s fight against global climate change. There may be one flaw in the President’s strategy: As events at this moment transpiring in California demonstrate, it’s not 2006 anymore. ::continue::

AB 32 is the most important piece of Governor Schwarzenegger’s legacy. Without it, he leaves only a state politically divided and financially stuck; with it, he leaves a state at the forefront of the fight against climate change, a demonstration of perhaps the grandest and most courageous leadership of any Governor in the last half century. But the Governor’s would-be Republican successors are “recovered” from the bipartisanship Schwarzenegger forged to pass AB 32. They see in his climate law a chance to run against California’s liberal Democratic establishment and gather to themselves California’s disafffected and overburdened taxpayers. 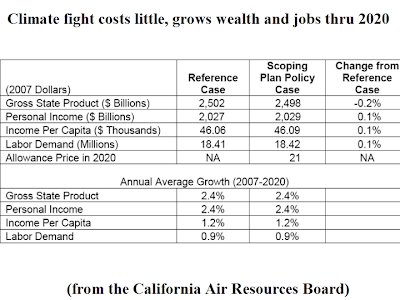 The fact is, however, that the fight against climate change is one of California’s biggest economic strengths. The energy/environment sector is one of the state’s economically strongest, having held its job and revenue capacities significantly better than the overall economy. (See GREEN JOBS BEAT OTHER JOBS )

Or, as the Updated Economic Analysis of California’s Climate Change Scoping Plan, from the California Environmental Protection Agency Air Resources Board (CARB), puts it: “This analysis confirms that successful implementation of these measures will mean that we can achieve the goals of AB 32 without adversely affecting the growth of California’s economy over the next decade, especially as the state recovers from the current economic downturn…” and “…these policies can shift the driver of economic growth from polluting energy sources to clean energy and efficient technologies, with little or no economic penalty.”

These conclusions are made with a fully calculated recognition of the impacts of the 2008-09 recession. Furthermore, as the CARB report says, the conclusions are the same as those in most other analyses of AB 32 and of analyses of similar policies in the national energy and climate change legislation proposed by the Obama administration.

The inside word is that Big Oil money from Texas will soon have bought the necessary signatures to get the measure that would roll back AB 32 onto California’s November ballot. (See The Fight for Renewables in California)

The Governor and California’s environmental community are ready to go to work in a massive campaign to defend the climate change law. The battle over the ballot measure will likely be epic, on the proportions of that over 2008’s Proposition 8, which the gay community believes it could have won if its organizing had been better. With the Schwarzenegger legacy on the line, more inside reports say the Governor and his forces are likely to be as well-organized as they have ever been.

Much more than a political legacy will be decided. This is a moment when the case for climate change will have to face its deniers in the public arena. Advocates for a New Energy economy will meet well-funded voices of Big Oil and Big Coal and the old ways. 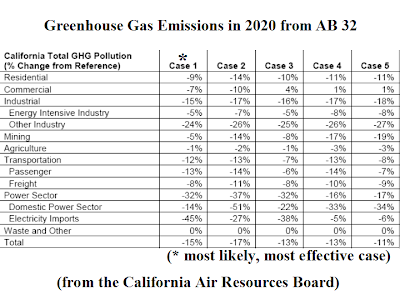 What Greta should advocate: A federation of microgrids