“We do not inherit the Earth from our ancestors: we borrow it from our children,” goes a Native American proverb quoted by environmentalist David Brower.

By the middle of this century, the children and grandchildren of today’s decision makers will be collecting on the loan. Will they get full payment?

Leaders in Europe are planning to pay off with interest. They want to not only leave the environment of the Earth much they way they found it, they want to turn over a New Energy economy that will sustain the people of Earth until the planet itself asks for something else.

As RE-thinking 2050; A 100% Renewable Energy Vision for the European Union, from the European Renewable Energy Council (EREC), makes clear, it is no small undertaking. Despite the ambitious programs the EU has begun, including its “Triple 20” goals for 2020 of obtaining 20% of its power from New Energy (NE) sources, cutting its greenhouse gas emissions (GhGs) 20% and improving its Energy Efficiency (EE) 20%, it remains reliant on largely imported fossil fuels.

The EU presently imports 55% of its energy and with business-as-usual will import 84% of its natural gas, 59% of its coal and 94% of its oil in 2030. This dependence on imported fossil fuels now costs each EU citizen an estimated €700 per year and that burden will be even greater in 2030.

RE-thinking 2050 demonstrates, as have other studies before it (see NEW ENERGY AND THE LONG RUN), that a transition to 100% New Energy by 2050 is not only technologically feasible but will secure the EU’s energy supply, boost the EU economy and grow EU jobs. ::continue:: 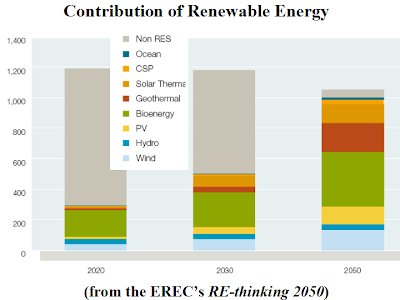 What makes such a transition feasible is a long term, methodical approach. Moving to 100% New Energy could be done in a decade or two only by a massive mobilization. A patient, determined transformation over 3 or 4 decades to a New Energy economy requires only the determination to seize an obvious opportunity in a world urgently in need of emissions-free New Energy, Energy Efficiency, economic opportunity and energy security.

The EREC acknowledges that the choices on a 40-year pathway are many and the certainties in looking 40 years ahead are few. Its paper is an attempt to define a vision not a detailed set of unalterable actions. It can at best make estimates of things like economic growth, fossil fuel prices and future energy demand. But making an effort to anticipate what lies ahead is the best way to inform choices made today.

Conservatives the world over continue to scream out their lack of imagination by clamoring for a more-of-the-same energy policy of fossil foolishness, GhG-spew and dependence on energies marketed by societies wed to medieval and oligarchic values. They call for greater dependence on “clean” energy sources that generate toxic spew and radioactive waste for which the best solution so far is an animal-like burying of it in a hole in the ground.

That is simply not the best this generation can bequeath. A decade ago it might have been possible to argue that the New Energies and Energy Efficiency were a too expensive choice and would impede the growth of tomorrow’s wealth. Now it is clear the New Energies and Energy Efficiency ARE tomorrow’s wealth. Refusing to commit to them is a refusal to build the next generation’s future.

The post-World War II Baby Boomers owe their heirs a healthfully breathing world and the New Energy economy that will nurture it. 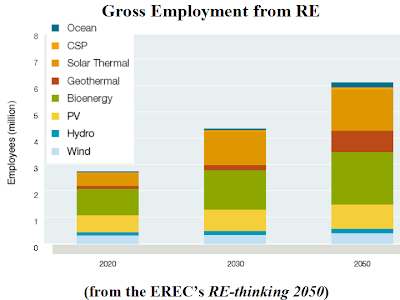