Remember when Mom used to say that the reward comes from the effort? That’s where the geothermal energy industry is right now.

But it’s a little scary because the most potent form of geothermal capacity, called Enhanced Geothermal Systems (EGS), seems to be teetering on the brink of falling into that category of New Energy solutions most exemplified by hydrogen fuel: It is a potential solution to all of the nation’s ills just a few years away from reality – and seems to remain so indefinitely.

Updated U.S. Geothermal Supply Curve, from researchers at the National Renewable Energy Laboratory (NREL) and the U.S. Department of Energy (DOE), examined 2 hypothetical cases, one (the “basic case”) in which there are only limited improvements in EGS development (reservoir performance) above what is possible presently, and another (the “target case”) in which “significant advances in reservoir performance” are obtained from funding of EGS research, development, and demonstration projects through DOE’s Geothermal Technologies Program (GTP).

Their estimates of U.S. geothermal resources in 4 categories of geothermal production show the cumulative potential is enormous:

Context: The U.S. presently requires a total electricity capacity of about 1,000 gigawatts. Deep EGS has a potential capacity of 15 times that. ::continue::

Each type of production has a different of accessibility, a different estimated capacity and cost and a different resulting levelized cost of electricity (LCOE). The amount of the potential supply that becomes real (gets developed), and especially the amount of the enormous EGS potential that gets developed, depends (just like Mom said) very much on the effort the nation invests in getting at it and bringing the LCOE down. For now, however, the thousands and thousands of gigawatts of electricity EGS could theoretically supply remain locked behind barriers of cost and real-world viability. 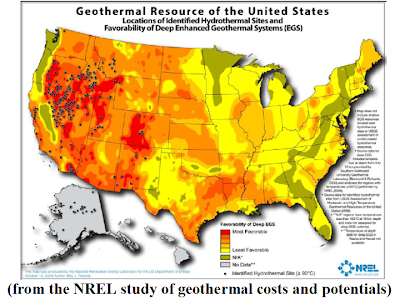 In both the basic and target cases, hydrothermal resources are the low cost (and low total potential return) options. But with the kind of investment in advancing EGS technology hypothesized in the target case, costs can be expected to drop significantly. This would result in a lot more deployment of EGS – if the other real-world barrier is overcome.

EGS is a way of using the earth’s heat in the absence of natural pools of hot water (hydrothermal resources) by deeply drilling to layers of scaldingly hot rocks. By pumping water down to them, their heat can be used to boil the water. The water can then be pumped back up, the steam can be captured and used drive turbines.

The capital cost is fairly manageable. EGS requires deep drilling, which is expensive. But if technology can be developed to control the capital cost of deep drilling, the supply curve can take over and change the economics of geothermal energy. No longer would a developer have to locate a hard-to-find hydrothermal resource. Hot rocks are common deep within the earth.

The real-world viability part of EGS is the other barrier and it could be more challenging. The deep drilling associated with EGS development seems to possibly create seismic disturbances. There may be a technological fix. The association of the deep drilling and the seismic events might not even be causal but coincidental. But until this matter is settled, geothermal remains restricted to its less costly but also less productive forms. 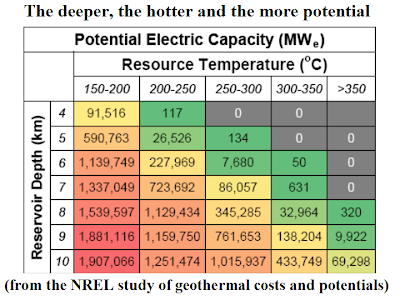