The City of Los Angeles is engaged in a fight over whether to increase the price of power and a new report on power and efficiency in North Carolina reflects interestingly on the debate.

Due to fossil fuel price fluctuations, uneconomic management and past politics, the LA Department of Water and Power (DWP) is in the hole financially. Antonio Villaraigosa, LA’s popular and dynamic young Mayor, proposes to get the municipal utility out from behind its debt with a Carbon Reduction Surcharge that adds 2.7 cents per kilowatt-hour to each ratepayer’s bill. A provision to put 0.7 cents per kilowatt-hour of that increase into a trust fund dedicated to the building of New Energy (NE) and Energy Efficiency (EE) is intended to somewhat assuage the hurt.

The Mayor’s hope is to turn LA DWP’s financial crisis into an economic opportunity for NE and EE. The Mayor is backed by a coaliton of LA environmentalists for 2 reasons: (1) They know how important it is to alter the city’s current dependence on fossil fuels, and (2) they know how much money DWP ratepayers will cumulatively save in the long run by investing in NE and EE infrastructure. The environmentalists are willing to give three-fourths of the rate hike money to the Old Energies (coal, natural gas and nuclear) now powering much of the city in exchange for ~$150-to-$180 million for NE and EE over the next 10 years and a voice in how it is spent.

But, even armed with city-commissioned polls showing how popular New Energy and Energy Efficiency are to Angelenos, can the Mayor convince his currently tax-averse City Council to approve the rate hike? ::continue:: 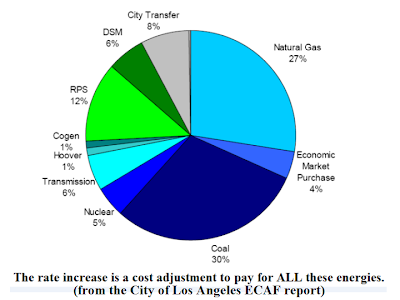 Investing in Energy Efficiency is of enormous value. It not only creates jobs and saves money, it specifically saves money that can be reinvested in New Energy, so that it doubles or triples the value of the spending.

The LA City Council, however, is a politically ambitious bunch and insiders say they are likely to be unwilling to raise utility rates on citizens to whom they will soon be going for votes, no matter how much macroeconomic sense it makes. They know that ratepayers are not well versed on the ways NE and EE will save them money in the long run but are keenly aware of how much a $2.50-to-$3.50 per month addition to their utility bill will hurt this and every month.

North Carolina’s Energy Future: Electricity, Water and Transportation Efficiency, from the American Council for an Energy Efficient Economy (ACEEE), is relevant to the LA debate because it so powerfully makes the macroeconomic case for the benefits of efficiency with – like so many other ACEEE reports on the subject – big, impressive numbers: North Carolina is one of the fastest growing states in the country and its growing energy needs will soon be burdensome but with spending now on EE the state can meet ~25% of its electricity needs, ~11% of its transportation fuel needs, create 38,000 net jobs and save consumers $3.6 billion by 2025.

The ACEEE report is a fine piece of work but if, like the LA City Council, North Carolina politicians were going to ratepayers with a concrete proposal and a specific rate increase, what they would need is not a big macroeconomic perspective. They would need a very simple report assuring ratepayers they will get at least as much back as they are being asked to spend.

LA’s Mayor is asking people in a state with 12%+ unemployment and an irresolvably dreadful budget deficit to invest in their future but aside from promises about getting off coal he is not saying much in specific terms about what’s in it for them. Instead, he is trading on their inclination to see the inherent logic of New Energy and Energy Efficiency.

They see it. They also see their savings accounts floundering, their home values plummeting, their health care costs skyrocketing and their jobs disappearing. Out of work North Carolinians are not interested in 38,000 jobs and out of work Angelenos are not interested in the 18,000 jobs promised by the Mayor’s proposal. They are each interested in 1 job. They are not in an altruistic mood and if the charismatic Mr. Villaraigosa and the high-thinking ACEEE don’t understand that, the hardworking, baby-kissing glad-handers on the LA City Council do. 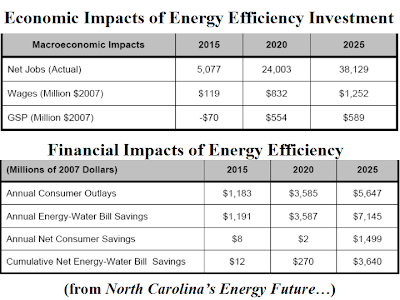 “Thirst for Power” documentary explores how water and power are intertwined