Astonishingly, there is a proposal in the U.S. Senate to withdraw the financial incentives provided to New Energy by the 2009 stimulus bill, potentially threatening tens of thousands of high-quality domestic jobs.

Beyond the short-term ramifications, however, the proposal is even more detrimental: It could further threaten U.S. economic competitiveness for generations. If the U.S. does not get competitive in the international race to develop a New Energy economy expected to be worth $2.3 trillion by the end of the next decade, it will have missed out on the biggest foreseeable opportunity in this century.

In Out of the Running? How Germany, Spain, and China Are Seizing the Energy Opportunity and Why the United States Risks Getting Left Behind, authors from the Center for American Progress (CAP) describe the federal government’s to date support of the New Energy/Energy efficiency sector as “lollygagging.” They attribute this performance to inadequate and inconsistent federal policies that represent, in sum, a failure of real commitment to the sector. And they explain what a blow to the nation’s international competitiveness it will be if effective policies do not emerge.

The CAP study details how Germany, Spain and China are using public policy to make a real commitment and facilitate the building of a New Energy (NE) and Energy Efficiency (EE) infrastructure. Policies and programs signal their business communities and support their marketplaces as the transition to an emissions-free New Energy economy that depends on secure domestic energy resources and provides new jobs and a renewed manufacturing base for their populations moves ahead dynamically. ::continue::

Apparently some members of the U.S. Senate find such things objectionable. But there are also Senators with more foresight now attempting to write energy and climate legislation that can win bipartisan support. Which element of U.S. political leadership prevails could determine the economic fate of the nation for decades. 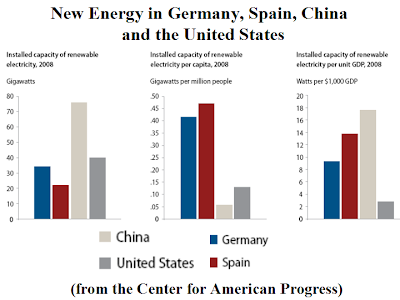 This is not exactly news. Rising Tigers Sleeping Giant, a Breakthrough Institute 2009 report, showed that U.S. New Energy R&D spending is embarrassing in comparison to that of important Asian economies. (See ASIA, THE U.S. AND THE NEW ENERGY RACE) Investing in Climate Change 2010, a Deutsche Bank 2010 study, showed that investments in the New Energy economy pay better than the economy as a whole but require favorable policies and incentives to put them on a level playing field against the entrenched Old Energies. (See THE BEST BETS ARE ON THINGS THAT BEAT CLIMATE CHANGE)

The question is not whether the U.S. can afford to commit to New Energy and Energy Efficiency, the question is whether it can afford not to: Evergreen Solar built a plant to manufacture solar photovoltaic panels in Devens, Massachusetts, but, 2 years later, in the wake of failing support from public policy, moved part of the operations to Wuhan, China. Will this continue to be the pattern for U.S. manufacturing and the fate of the U.S. worker? 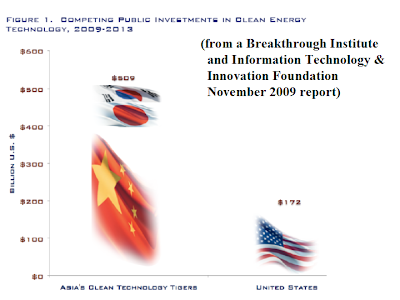 The problem is that with innovation, you get what you pay for. (click to enlarge)

This post is based on Will U.S. Companies Be Shut Out of Clean-Tech Markets by China and Other Competitors? by Lisa Friedman (March 4, 2010, NY Times) and Out of the Running? How Germany, Spain, and China Are Seizing the Energy Opportunity and Why the United States Risks Getting Left Behind by Kate Gordon, Julian L. Wong, and JT McLain (March 2010, Center for American Progress)