There is only one way to explain a NY Times headline about a new study on the hydrokinetic (wave, tide, current and other ocean, lake and river) energies: Inattention.

While the Times headline suggests potential devastation to world waterways, the stated purposes of the Department of Energy paper, as defined by the Energy Independence and Security Act of 2007 (EISA), are to:

(1) evaluate the potential environmental impacts of the various competing technologies,

(3) determine how monitoring and adaptive management can measure and mediate impacts, and

(4) define how an adaptive management program can be created.

In other words, the more than 100 different concepts for how to generate energy from the natural dynamics of water movement and temperature COULD – like anything else that goes into oceans, lakes and rivers, from ocean liners to Aquaman – cause responses in the ecology. But, because the need to capture the enormous emissions-free, renewable power generation capacity in ocean, river and lakes warrants entering those environments, prudence dictates proceeding carefully and the report further ensures developers WILL.

From the opening paragraph of the report: “There is no conclusive evidence that marine and hydrokinetic technologies will actually cause significant environmental impacts, and the possible effects detailed in this report should serve to highlight areas where further information and research is needed.”

Not headline material in a journalistic world where it has to bleed to lead (or at least describe illicit sex by a celebrity).

Report to Congress on the Potential Environmental Effects of Marine and Hydrokinetic Energy Technologies, from the Office of Energy Efficiency and Renewable Energy (EERE) of the U.S. Department of Energy (DOE), admirably fulfills its assignment. It identifies 9 kinds of possible environmental effects, how those effects can be methodically studied and the adaptive management principles that can be used to mitigate those effects. ::continue:: 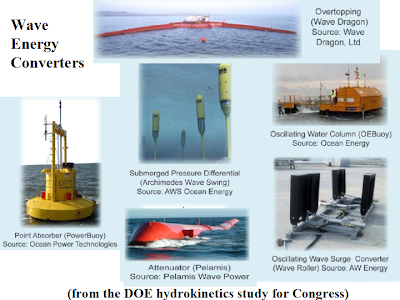 The EERE study is almost entirely speculative because relatively few of the 100+ technologies have ever had significant enough real-world tests to demonstrate what they can or might do. The paper admits in its opening paragraphs that some of what it concludes is based on what comparable activities in oceans, rivers and lakes do.

To its credit, the Times piece does conclude by reporting that Representative Bart Gordon (D-Tenn.), Chair of the House Science and Technology Committee, will introduce legislation, along with a proposal for continued funding (40 million in 2009, $50 million in 2010 and $40.5 million for 2011), to have DOE expand research on marine and hydrokinetic technologies. Gordon’s bill specifically calls for real-world demonstration projects, a test facility and a system for environmental monitoring to select sites where impacts will be negligible to minimal.

In other words, development in a way that would prevent the headline the Times used from ever being accurate.

At the very bottom of the article, it also reports that the study found some projects will likely BENEFIT ocean, lake and river habitats. Now that’s a headline. 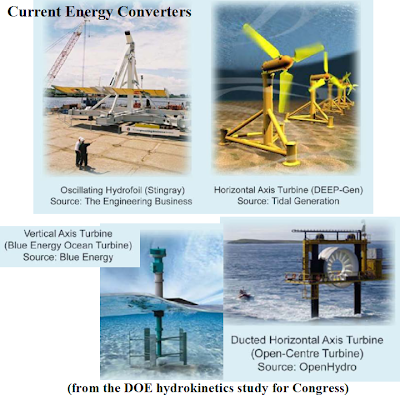 This post is based on Wave Technologies Could Harm Marine Resources — DOE Study by Katie Howell (February 24, 2010, NY Times) and Report to Congress on the Potential Environmental Effects of Marine and Hydrokinetic Energy Technologies (December 2009, U.S. Department of Energy)