Universities, think tanks and independent consultants continue to generate research proving that a shift to a New Energy economy is one of the best things the nation can do to deal with its daunting unemployment numbers.

Unfortunately, if the nation makes such a choice to invest in and develop New Energy and Energy Efficiency, it will have to endure improved energy security, cleaner air and water, reduced greenhouse gas emissions and a renewed and expanding economy. But the nation is tough and can take the terrific with the fantastic.

Building the Clean Energy Economy: A Study on Jobs and Economic Development of Clean Energy in Utah demonstrates that the state’s proposals (1) to increase its Energy Efficiency 20% by 2015 and (2) to require 20% of its electricity to come from New Energy sources by 2025 would, by 2020, result in (1) ~7,000 net new permanent Utah jobs, (2) $310 million in net new annual Utah earnings and a $300 million net annual increase in Utah’s gross domestic product by state (GDPS).

Those rewards are NET, that is, after accounting for losses due to the shift away from the Old Energies. And those rewards don’t include what the state stands to gain if it builds a New Energy economy that brings in national and international trade the way its world-class ski industry does. ::continue:: 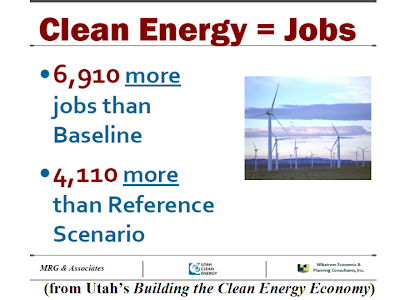 The study arrives at its conclusions by comparing an estimate of business-as-usual (the “Reference Scenario”) with an estimate of macroeconomic activity that would come with the proposed Energy Efficiency (EE) and New Energy (NE) policies in place (the “20% Clean Energy Scenario”).

The 20% by 2020 scenario includes 3 times the savings from EE as business-as-usual. The NE would be largely from Utah’s big wind and geothermal assets (with some solar and biomass as well). 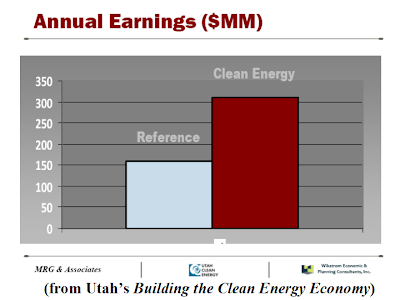